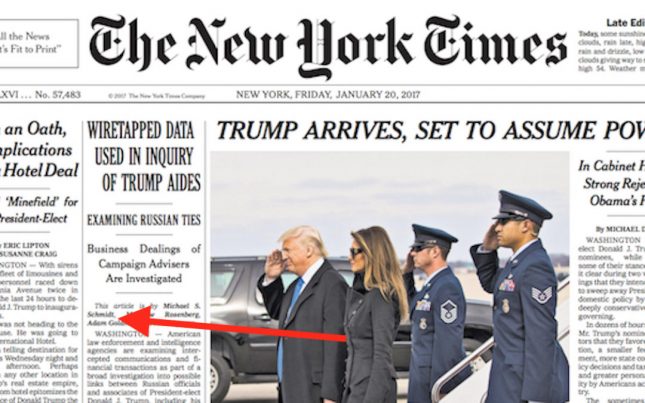 “The Democrats made up and pushed the Russian story as an excuse for running a terrible campaign. Big advantage in Electoral College & lost!” the president tweeted Monday morning.

“James Clapper and others stated that there is no evidence Potus colluded with Russia. This story is FAKE NEWS and everyone knows it!” he said in a follow-up tweet, adding in a third: “The real story that Congress, the FBI and all others should be looking into is the leaking of Classified information. Must find leaker now!”

Detractors and #NeverTrump types are more likely to hyper-focus on Comey’s statement during his Monday testimony. He claimed that neither his agency nor any other within the U.S. intelligence community have any evidence of Trump’s previous wiretapping claim. (RELATED: Who’s Lying About ‘Wiretapping’ Trump Tower – The Media, Congress Or The Intelligence Community?)

“FBI Director Comey: Justice Dept. has no information that supports Trump’s tweets alleging he was wiretapped by Obama,” blared the Washington Post in its online edition.

I can’t think of anyone who actually believed that the FBI director and the director of the NSA were going to admit publicly that the former president put out the order to have Trump put under surveillance. This is because, as has been pointed out, presidents have not had the authority to directly issue such surveillance orders against American citizens since late 1970s-era intelligence reforms.

But presidents can “authorize” such surveillance through their appointees, especially at the Justice Department – which oversees the FBI. And in fact, the law is clear on this: Presidents can order their attorney generals to authorize said electronic surveillance on American citizens, provided it is done under the guise that the targeted American may be an agent of a foreign government.

50 U.S. Code § 1802 states, in part, “(1) Notwithstanding any other law, the President, through the Attorney General, may authorize electronic surveillance without a court order under this subchapter to acquire foreign intelligence information for periods of up to one year if the Attorney General certifies” that a handful of conditions exist (see them here).

Former Bush Attorney General Michael Mukasey told ABC News’ “This Week” earlier this month that while Trump’s direct mention of Obama ordering the surveillance was incorrect, “I think he’s right in that there was surveillance and that it was conducted at the behest of the attorney general – at the Justice Department.”

“It means there [was] some basis to believe that somebody in Trump Tower may have been acting as an agent of the Russians, for whatever purpose, not necessarily the election, but for some purpose,” he continued, as noted by Red State.

Plus, Comey also took the uncharacteristic step of confirming to the House Permanent Select Committee on Intelligence that his agency, indeed, is conducting an investigation into potential ties between the Trump campaign and Russian figures. So on this point, Trump is also right: Comey has confirmed an investigation exists and is ongoing.

Earlier reports have noted this, however, and they have included claims that the FBI, indeed, did obtain a Foreign Intelligence Surveillance Act court-ordered warrant to conduct surveillance on a server at Trump Tower in New York City that was thought to be communicating with Russian banks. But the FBI report found no evidence to suggest any such communications. (RELATED: Flat out: Someone in government or the media is lying about ‘wiretapping’ Trump Tower story)

And on that note, investigative reports by Circa News and Heat Street both cite confidential sources who said the FBI did obtain the FISA warrant.

So someone is lying, obfuscating, or being intentionally vague regarding what probes were ordered against Trump and by whom. It’s obvious now that such investigations exist, but again, as before, nothing has been found to justify the Democratic narrative that “Russia hacked the election” in favor of Trump.