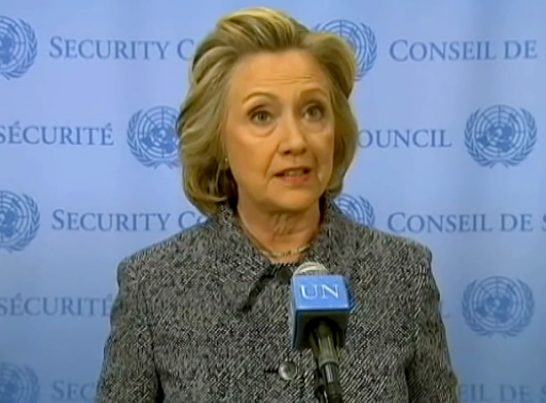 (NationalSecurity.news) A host of security experts have said Democratic presidential contender Hillary Clinton’s use of a personal email server while heading up the State Department was a huge mistake that likely led to the breach of highly classified data by competitor nations.

One of the most vocal critics thus far is a former CIA operative who currently serves as a national security subject matter expert for CNN and who is not known to be a political partisan. “If this was on her server and it got into her smart phone, there’s a big problem there,” said Bob Baer during an appearance on CNN International Saturday. He said materials found on Clinton’s private server are likely more sensitive and secretive than what former NSA contractor Edward Snowden stole.

“Seriously, if I had sent a document like this over the open Internet I’d get fired the same day, escorted to the door and gone for good — and probably charged with mishandling classified information,” Baer added.

The likely damage caused by her handling of what inspectors general have now said included sensitive, secret and top secret information, made Baer question her fitness for the White House.

“If this in fact were on her hand held [phone] — was sent to her or she forwarded it in any way — I wonder whether she is capable of being president,” he said.

Pressed if what Clinton has done is a deal-breaker in her bid for the presidency, Baer responded, “As a national security employee, a former one, yes.”

“I can’t tell you how bad this is,” he went on. “A lot of things get talked about, a lot of gossip, but having documents like this sent across the Internet, it could be hacked very easily and probably were hacked, is a transgression that I don’t think the president of the United States should be allowed to, you know, have committed.”

Others have voiced similar concerns. A recent memo to Congress from I. Charles McCullough III, the U.S. Intelligence Community Inspector General, along with a joint statement he made with the Inspector General from the State Department, pointed out that classified data had been found in emails Clinton received on her private server – including top secret information – and that such information should never have been stored on an unsecured server to begin with.

“In other words, he suggests she violated the procedures for handling classified information, a failing that can result in government workers being reprimanded or criminally charged,” wrote
Rowan Scarborough of The Washington Times August 3.

In March, a number of security experts told Gawker that it was highly likely that at least some of Clinton’s emails were hacked.

“It is almost certain that at least some of the emails hosted at clintonemails.com were intercepted,” said independent security expert and developer Nic Cubrilovic.

“When you are a staffer in a government department, internal email never leaves the network that the department has physical control over,” Cubrilovic continued. But “with externally hosted email every one of those messages would go out onto the Internet,” where they’re subject to probing and hacking.

Security researcher Kenn White agreed that setting up private internet access, as Clinton did (ClintonEmail.com), creates too many dangerous variables as emails go from person to person.

“I think the bigger security concern here is the complete lack of visibility into who has been administering, backing up, maintaining, and accessing the Secretary’s email,” he told Gawker.

“If classified documents were exchanged, who viewed them? Were they forwarded? Where multiple devices (ie, mobile phones and tablets) configured to access the account? Was encryption required or optional for remote access?”

Hillary Clinton didn’t take a basic precaution with her personal e-mail system to prevent hackers from impersonating or “spoofing” her identity in messages to close associates, according to former U.S. officials familiar with her e-mail system and other cyber-security experts.

This vulnerability put anyone who was in communication with her ClintonEmail.com account while she was Secretary of State at risk of being hacked. Clinton said at the United Nations last week that there were no security breaches of her personal email server, which she used to send and receive more than 60,000 professional and personal emails. But former cybersecurity officials and experts told us that there were gaps in the system.

“I have no doubt in my mind that this thing was penetrated by multiple foreign powers, to assume otherwise is to put blinders on,” Bob Gourley, the chief technology officer at the Defense Intelligence Agency from 2005 to 2008 and the founder of Cognitio, a cybersecurity consultancy, told Rogan and Lake.

For her part, Clinton says she took added measures to ensure her server was protected.

“Robust protections were put in place and additional upgrades and techniques were employed over time as they became available,” Nick Merrill, a spokesman for Clinton’s personal office, told Bloomberg View. “There was never evidence of a breach, nor any unauthorized intrusions.”

Clinton still has not answered why she felt it necessary to establish her own personal email server outside the State Department’s better-protected systems.

Shortly after news broke that Clinton was using a personal server, President Obama claimed during an interview with CBS News’ Bill Plante that he had not known about it.

A few months later, in June, former senior White House advisor David Axelrod claimed he did not know Clinton was using a private email server, but the Washington Examiner reported the following month that on June 23, 2009, Axelrod wrote her at [email protected] with a “get better” note that read:

I have hesitated to email because I’m sure you are being inundated with good wishes. But I just wanted to tell you how sorry I was to hear about your injury. It sounded horribly painful. I hope you will allow yourself to rest and recover. You are an all-star player, and we need you for the long run.

Clinton, who responded to Axelrod from her private email, had fallen and fractured her right elbow.