Democrats go to war with civilization, call for ABOLISHING borders, prisons and all private-sector business 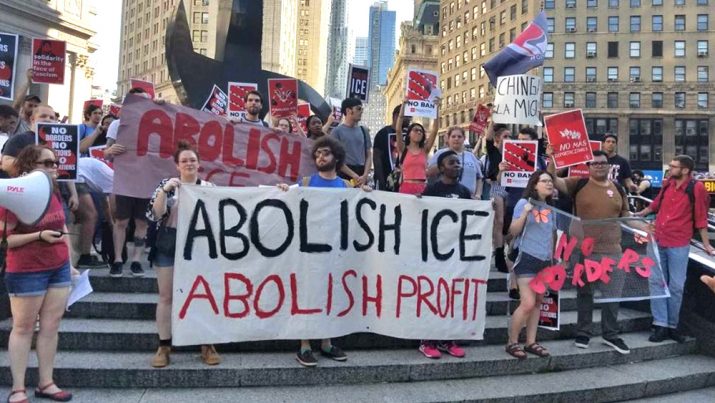 You may remember a time when Democrats called for free speech, civil liberties and a stronger America. Now, they’ve gone “full retard,” as the saying goes, and their mindless minions are marching nationwide, demanding:

This is now the position of the Left. The party that once stood for civil liberties now stands for the complete invasion and overrunning of the United States of America. The Democrat platform is, essentially, the platform of war against America. Even more philosophically stated, it is actually a war with civilization. (If you think Democrats know how to run things, check out the current situation in Venezuela, run by the very same lunatics who are now calling for abolishing ICE in America…)

Democrats want to unleash a wave of violent criminals, murderers, rapists, child traffickers and illegals to sweep across your neighborhood and loot everything in sight

As part of the Democrats’ war against civilization, the New York Times has declared a full assault on the First Amendment, now claiming that when conservatives exercise free speech, it’s dangerous to society. Democrats are now even attacking Bernie Sanders for not being radical enough. He’s a radical socialist, but he’s too “moderate” for Leftists now, reports Breitbart.com, because he hasn’t yet called for open borders and the flooding of America with illegals.

Deranged liberal mobs spent the weekend staging marches nationwide, holding up “Abolish ICE” signs and tweeting out demands to end borders, shut down all prisons and have the government seize all private businesses in the name of “equality.”

By “abolish profit,” they mean the complete elimination of free market capitalism, privately-held businesses, and the entire private sector of the U.S. economy. To the Left, only government should have authority and control over society… and of course, they want to be the lunatics running that government.

Understand what you’re seeing here: Democrats are now synonymous with utter lawlessness. They want no borders, no prisons and ultimately no police. They push sanctuary cities to protect violent criminal illegals, and they actively seek to abolish even the most fundamental right of any sovereign nation: the right to protect your own border.

Democrats are actively trying to unleash mass criminal chaos across America. Because they can no longer win at the ballot box, they’re deliberately working to unleash a bloody civil war in the streets of America. They want total chaos. They want an end to anything resembling a civil society. They demand to either run the government with their fascist tyranny, or destroy the nation and start over.

Recognize what you’re really watching here: The complete de-masking (de-cloaking) of the true intent of the Democrat party, which is to abolish America and usher in a new Fascist police state regime run by left-wing tyrants. (That was their plan all along with the 2016 election, but the people overrode their evil plot and elected Trump to try to save America.)

This is why more and more people are walking away from the deranged Democrat party. A new movement called #walkaway is going viral across social media. Intelligent, informed people are leaving the Democrat party in droves because they realize Democrats are now radical left-wing lunatics and terrorists who openly desire rampant lawlessness and chaos.

If you value your life, liberty, property or even your job, join us in defeating the Democrats at every election from this day forward. Your very life depends on it. The future of human civilization on this planet depends on it. If the lunatic Leftists win, America collapses and the world plunges into a dark chapter of destitution, tyranny, mass starvation and collapse.

Listen to my podcasts below for more details. Hear more podcasts daily at HealthRangerReport.com and watch for my new channel on the upcoming YouTube alternative video community REAL.video, launching later this week.