False Flag? Obama Administration said to have supplied weapons to rebels who killed four in Benghazi 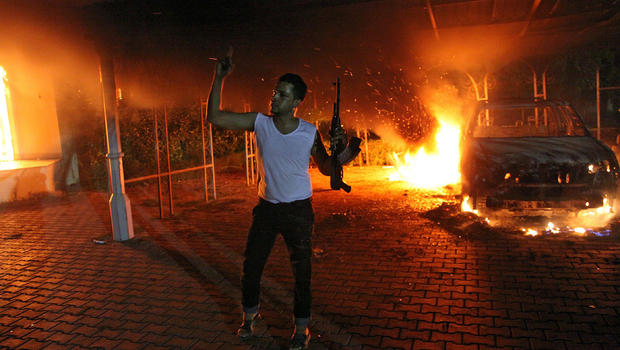 (NationalSecurity.news) A Libyan witness to the attack on the U.S. Embassy in Benghazi says that the weapons used by militants involved in the onslaught, in which four Americans were killed, including U.S. Ambassador Christopher Stevens, were given to them by the Obama Administration.

As reported by Breitbart News, the witness said he was living near the U.S. compound when it was attacked on Sept. 11, 2012. Libya’s al-Qaeda-linked militia group known as the February 17th Martyrs Brigade was reportedly hired by the Hillary Clinton-run State Department to guard the U.S. compound in Benghazi, but it failed to do so the entire day of the attack, the witness said.

It was unusual that in the morning of September 11, the brigade was not providing the typical level of security around the U.S. consulate and the ambassador himself, a sign that something was off from the start and a major red flag that there was something suspicious in the works, he added.

Militants carried out at least three separate attacks against the compound in Benghazi, beginning at night on Sept. 11 and lasting into the early morning hours of the following day. The militants may be the same ones who were allegedly armed by the Obama Administration during the U.S./NATO-backed rebellion against Libyan leader Col. Muammar Gaddafi, who was deposed and executed in October 2011. Since then, Libya has been in various states of chaos, as several jihadist groups vie with each other to fill a power vacuum left by the dissolution of the Libyan government.

The witness told Breitbart News that it was evident from the beginning that the attack that night on the Benghazi compound was not a simple protest, as later attested by the Obama Administration and then-Secretary of State Clinton herself.

He said that some 40 armed militants – mostly aligned with al-Qaeda – approached the embassy that evening, and that four or more Americans were evacuated from the compound “minutes before the first attack,” because they saw the militants heading their way.

The witness appeared surprised that Stevens had not been evacuated, however.

“Sometimes it feels like a cheesy, cheap movie… something like the United States intended for the ambassador to die,” added the Benghazi witness. “They sacrificed him as a scapegoat.”

Earlier this year, The Washington Times obtained secret intelligence reports noting that the Obama Administration armed Islamist extremists and other rebel factions in 2011 as Clinton worked to overthrow Gaddafi:

Libyan officials were deeply concerned in 2011, as Secretary of State Hillary Rodham Clinton was trying to remove Moammar Gadhafi from power, that weapons were being funneled to NATO-backed rebels with ties to al Qaeda, fearing that well-armed insurgents could create a safe haven for terrorists.

The intelligence reports included a 16-page list of weapons that Libyan officials supposedly tracked to the rebels from Western sources or their allies in the area, the Times reported. The documents were corroborated by a U.S. intelligence asset familiar with them as well as former top Gaddafi regime official Mohammed Ismael.

In addition to the U.S. government, Congress – including Sen. John McCain, R-Ariz. – was also working with rebels including the February 17th Brigade.

President Obama and his team initially blamed the attack on individuals protesting a film that insulted Islam’s Muhammad. Moreover, the Obama Administration continued to insist the that Benghazi attack was not pre-planned, Breitbart News reported.