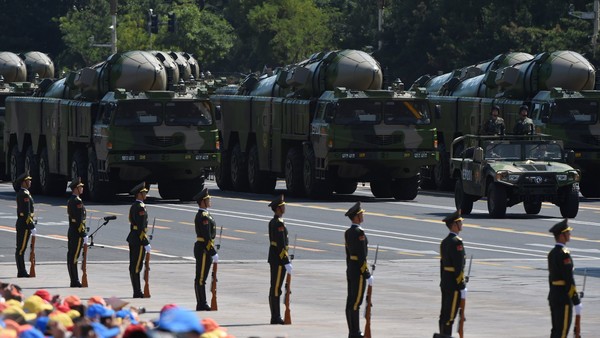 (NationalSecurity.News) On the 70th anniversary of Japan’s surrender in World War II, the Chinese held a massive military celebration that included a parade featuring many of the People’s Liberation Army’s most modern weapons.

Included in the parade was a new ballistic missile that has been little seen outside Western intelligence services but much talked about among defense analysts: the DF-21D, which has been touted as a Mach 10 monster capable of striking a moving ship at sea.

The world got its first real glimpse of the “carrier killer” during China’s military parade and celebration, which featured a massive display of military might including 12,000 troops, 500 tanks and other military vehicles, and 200 warplanes (as well as a special contingent of Russian troops, as President Vladimir Putin was a special guest of Chinese President Xi Jinping).

As Britain’s Financial Times reported Sept. 3, the new missile is causing quite a stir:

A weapon so secret China would not reveal it for years will make its first public appearance in a military parade on Thursday, Chinese defence experts say.

The so-called “carrier-killer” missile that threatens to reshape the balance of power in the western Pacific is set to wheel through the centre of Beijing along with 12,000 troops and 500 tanks and other vehicles as China marks the 70th anniversary of the end of the second world war. …

Like an intercontinental ballistic missile, the DF-21D goes into orbit, but after re-entering the atmosphere it is capable of manoeuvring on to a target, making it theoretically capable of landing a large warhead on or near a moving ship. …

Some analysts say such missiles threaten to consign aircraft carriers — which form the basis of current US naval strategy — to the dustbin, just as aircraft carriers themselves did to battleships with Japan’s 1941 attack on Pearl Harbor.

“There is more potent symbolism in this missile than any other weapon in the Chinese arsenal,” Ashley Townshend, a research fellow at the U.S. Studies Centre at the University of Sydney, told the Financial Times. “This is the missile that really does potentially encroach on US capability to deploy military power close to Chinese shores. It significantly raises the risks and costs.”

Clearly, Beijing views the U.S. Navy as its principle (potential future) nemesis. There has been much written about the Chinese military’s efforts to develop so-called “stand-off” weapons designed to keep American warships out of China’s neighborhood, should Beijing choose to exercise territorial claims over parts of the South and East China Seas that other nations claim or are located in what the rest of the world considers “international waters.”

But is this new Chinese missile (first discovered on a Chinese blog in 2009) that weapon? Is it really capable of destroying a U.S. aircraft carrier – the most awesomely powerful, and heavily shielded, warship in the history of naval warfare – while moving?

That depends upon whom you ask.

Robert Farley, writing for The National Interest in September 2014, discussed the complicated nature of striking a warship at sea, even one as large as a U.S. carrier:

An anti-ship ballistic missile is more than just a missile; it requires a broad, sophisticated support system. Unlike a missile launched at static targets, a carrier-killing ASBM [anti-ship ballistic missile] requires terminal guidance, as it must revise its flight path after reentering the atmosphere. From launch to strike, the flight of an ASBM can take fifteen or so minutes, at which time the carrier in question will have more than likely moved its position on the open ocean. The missile thus needs to be adjusted remotely or needs to have the capacity to identify the carrier on its own. Both of these processes depend on the operation of a sophisticated set of sensors, as well as a communication system capable of integrating these sensors and transmitting information to shooters.

As Jamestown Foundation scholar Andrew S. Erickson observed in May 2013, “The successful achievement of high-quality, real-time satellite imagery and target-locating data and fusion as well as reliable indigenous satellite navigation and positioning would facilitate holding enemy vessels at risk via devastating multi-axis strikes.”

He further noted, “The ASBM’s physical threat to U.S. Navy ships will be determined by the development of associated systems and organizations, which currently limit data fusion and coordination in the complex task of identifying a U.S. aircraft carrier in the open ocean.”

In April 2013, J. Michael Cole, writing in The Diplomat, noted that it’s possible that China is merely hyping the missile’s anti-ship capability, as part of an asymmetrical warfare campaign:

[E]ver since the People’s Liberation Army then chief of general staff General Chen Bingde gave the first official confirmation in July 2011 that the PLA was developing the DF-21D ASBM, specifics about the missile have been few and far between, with officials refraining from discussing the program in detail. For the most part, the hype has been the result of reports in Chinese media, which were subsequently picked up by Western outlets and analysts — including the missile’s alleged maximum range of 2,700 km, which, it was later found, had been an erroneous addition by editors at the China Daily.

However, Cole nevertheless notes that, based off the Pentagon’s 2013 assessment of China’s military capabilities, “the U.S. military is buying into the capabilities of the DF-21D.”

Others have said the DF-21D is not the only weapon the U.S. Navy should be concerned about.

Richard Fisher, a missile expert at the U.S.-based International Assessment and Strategy Center, pointed to another anti-ship missile recently deployed by China: a supersonic air-launched cruise missile carried by the H-6K bomber.

“You begin to see that decades of Chinese military investment are resulting in capabilities that are changing the balance of power in Asia against the United States,” he told Financial Times.

In his assessment, Farley noted that, in order to be successful, the DF-21D must rely on a complicated and interconnected group of systems in order to be able to identify and then target an American carrier at sea. He also notes that the missile would then need to navigate its way through a complex, and lethal, array of U.S. anti-ballistic missile countermeasures – which could soon include, according to a separate National Interest piece from June, lasers and other directed energy weapons.

In the end, it is clear that the Pentagon is taking China’s anti-ship ballistic missile technology seriously. What is less clear is whether such a system is actually capable of striking an American carrier.

Then again, it could be that nobody at the Pentagon really wants to find out, which means that China could dominate a future crisis without ever launching a single missile.