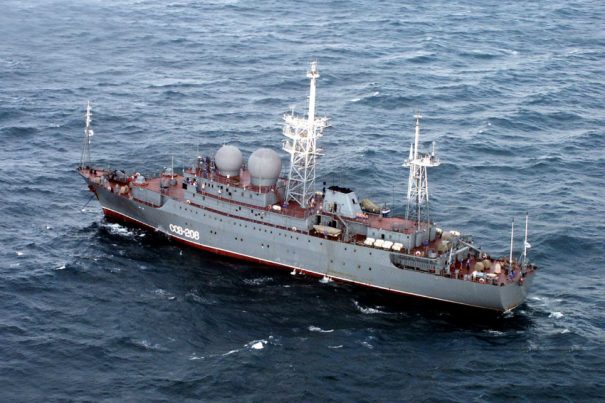 (NationalSecurity.news) A Russian intelligence-gathering ship was spotted recently near a vessel contracted by the American-owned Shell Oil Company as it was exploring for oil in the Arctic, sources told CNN.

During a question-and-answer session, Pentagon spokesman Jeff Davis confirmed the sighting, adding that no U.S. defense assets were deployed in response, though American subs are known to monitor ships of opposing nations when they are in proximity to U.S. assets.

Also, the fact that the Defense Department acknowledged the presence of the Russian ship was telling in and of itself.

“We [are] aware of the Russian vessel Kurily sailing in the vicinity of the Nobel Discoverer,” Davis said. “We recognize the rights of all sovereign nations to freely navigate in international waters.”

CNN reported that U.S. Northern Command was alerted to the presence of the Kurily after intelligence sources first notified the U.S. Coast Guard.

The ship being shadowed by the Russian vessel was contracted to Shell Oil and is actively searching for oil in the Chukchi Sea, a region north of the Bering Strait that lies between Alaska and Russia. American and foreign oil companies are currently racing to discover – and claim – oil in the region.

“The U.S. oil giant had been pushing for years for a greenlight from the federal government to begin tapping into vast oil reserves in the Arctic, drilling that environmentalists vigorously oppose due to risks to the environment and wildlife,” the network reported.

The U.S., Russia and even China – as well as other Western powers including Canada, Norway and Denmark – are all competing for a share of the Arctic, as ice floes shrink and the region becomes more accessible. Vast mineral and oil/gas deposits are thought to be hidden under the Arctic.

As NationalSecurity.news has noted, the Arctic is becoming more strategic to the West and Russia.

Citing an earlier report in the Los Angeles Times, over the past 14 months, many of the U.S. intelligence community’s 16 agencies have tasked analysts to work full-time on the Arctic – its expanse, its ecosystems and especially its strategic importance and value. Recently, the Office of the Director of National Intelligence, led by DNI James Clapper, convened a “strategy board” that brought together the analysts so they could share and discuss findings.

Besides relying on U.S. spy satellites overhead and U.S. Navy sensors buried deep in frigid waters, analysts process raw intelligence from a recently overhauled Canadian listening post located near the North Pole, as well as a Norwegian surveillance ship called the Marjata, now undergoing an upgrade at the Navy’s shipyard in southern Virginia.

The Obama Administration’s renewed strategic interest in the Arctic was highlighted recently after the Pentagon confirmed it was tracking five Chinese warships in the Bering Sea between Alaska and Russia – the first time that has happened. Defense officials said the Chinese ships were in international waters steaming towards the Aleutian Islands but otherwise posed no threat.