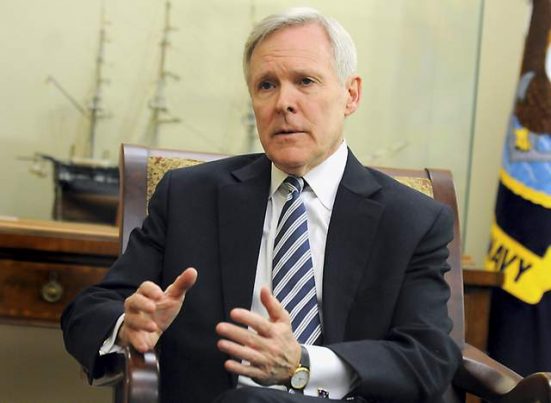 (NationalSecurity.news) A rift is developing between Navy Secretary Ray Mabus and the Marine Corps over plans to fully integrate women into all of the services’ combat roles, following the release of a Corps study showing that mixed male-female Marine units were routinely outperformed by all-male units.

The study – which found that female members performed at lower overall levels, had more difficulty completing tasks, fired weapons with less accuracy than their male counterparts and sustained much higher injury rates – has since been dismissed by Mabus as essentially gender-biased, a view that has angered career Marine officers and senior enlisted personnel involved in the study, as well as members of Congress.

“They started out with a fairly [large] component of the men thinking this is not a good idea, and women will not be able to do this,” Mabus said in an interview with NPR last week. “When you start out with that mindset, you’re almost presupposing the outcome.”

Those comments immediately drew fire from Marine officers and senior enlisted personnel who were involved in the study, as well as heat from some members of Congress. Nevertheless, many of them pointed out that incoming Marine Corps Commandant Gen. Joseph Dunford, who is tasked with making a recommendation regarding the opening of combat roles to female Marines by Oct. 1, could ask the Pentagon for exemptions for some slots.

However, Mabus appears to have preempted that option as well.

Speaking at the City Club of Cleveland Sept. 14,[PDF] Mabus proclaimed, “Nobody’s asking for an exemption in the Navy. And I’ve been pretty clear about this for a while – I’m not going to ask for an exemption for the Marines.”

Mabus’ statements, as well as his position overall – that no slots should remain closed to women despite the results of the study – have not been received well within the Marine community and Congress.

Marine Sgt. Maj. Justin LeHew, a Navy Cross recipient and the top enlisted leader with Marine Corps Training and Education Command, wrote a Facebook post recently[PDF] calling Mabus’ comments “way off base” and defending both the integrity of the study and the Marine Corps as a whole, while criticizing the Obama administration’s military policies.

“Ok, been silent long enough on this. I have been a part of this process from the beginning and I am just going to put it out there,” he wrote. “The Secretary of the Navy is way off base on this and to say the things he is saying is… flat out counter to the interests of national security and is unfair to the women who participated in this study.”

LeHew said the best women were assigned to units involved in the study, and that he and other senior leaders were “the most progressive and open-minded,” thus giving the study as much chance to succeed as possible.

“End result? The best women in The [Ground Combat Element Integrated Task Force] as a group in regard to infantry operations were equal or below in most all cases to the lowest 5 percent of men as a group in this test study,” LeHew said. “They are slower on all accounts in almost every technical and tactical aspect and physically weaker in every aspect across the range of military operations.”

He then leveled criticism at the administration.

“Listen up folks. Your senior leadership of this country does not want to see America overwhelmingly succeed on the battlefield, it wants to ensure that everyone has an opportunity to persue [sp] whatever they want regardless of the outcome on national security,” he wrote.

“Secretary Mabus is quickly proving that he’s a political hack who cares more about doing the White House’s bidding than the combat effectiveness of the Marine Corps,” Hunter said. “Mabus is not only insulting the Marine Corps as an institution, but he’s essentially telling Marines that their experience and judgment doesn’t matter.”

The Marine Corps Times reported that Defense Secretary Ash Carter was still waiting to receive recommendations from all the service branches and that no decision has been made about how best to proceed on the issue.