High-powered lasers to become the latest development in drone warfare 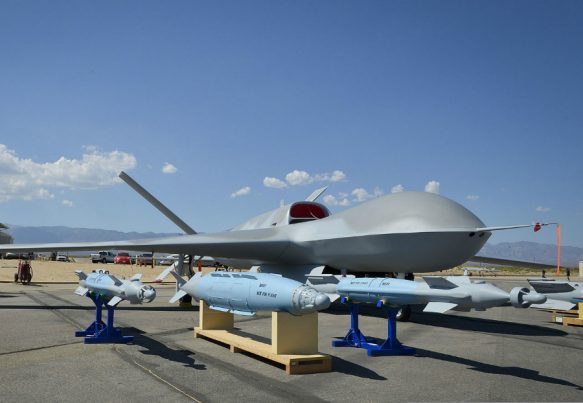 (NationalSecurity.news) The United States has been a leader in drone warfare for years, but the Pentagon is about to step it up a notch further by adding high-powered lasers to its most lethal drones.

As reported by Defense One, the futuristic-sounding concept may be just two away as developers are already hard at work on the project. General Atomics Aeronautics Systems, Inc., (GA-ASI) a San Diego-based firm that manufactures the military’s popular Predator and Reaper drones, is launching a privately funded study to integrate a 150-kilowatt solid-state laser onto an Avenger (Predator-C) drone. If successful, drones outfitted with high-energy lasers could become a reality by 2017, the company told Defense One.

“We’re funded right now to develop a laser module compatible with the aircraft and study putting it on the Avenger,” Michael Perry, Vice President for Mission Systems at GA-ASI, said. “We hope to be funded to do that.”

The 150-kw laser that researchers are attempting to fit aboard drones is five times more powerful than a 30-kw laser being tested aboard the USS Ponce in the Persian Gulf (see demo video below).

GA-ASI is better known for manufacturing MQ-1s and MQ-9s – the aforementioned Predator and Reaper drones, respectively – which form the backbone of the Pentagon’s drone force, than its work with lasers. However, in June, the company delivered a 150-kw liquid laser to the Defense Department for extensive testing at the White Sands Missile Range in New Mexico.

The 30-kw laser aboard the Ponce has more than enough power to destroy enemy drones or burn a hole in small watercraft. In addition to greater overall power, the 150-kw laser offers a significant increase in beam quality as well, which will provide higher lethality than the Ponce system.

However, experts note that putting a functioning laser aboard a drone is no given, as there are a number of technological hurdles to overcome. Most notably, striking a target with a laser mounted underneath a vibrating drone platform moving quickly through dust-laden and water vapor-laden air is much more difficult than launching a Hellfire missile at a moving vehicle.

“Before you spend any money on a laser you better darn well show that you can acquire, ID, and track the objects of interest so that you could put a laser on them,” Perry told Defense One. “You have to be able to compensate for aero-optic distortion.”

Then, once the targeting problem is solved, other aspects of physics will present further challenges.

Lasers in the 150-kw range, at present, are large, heavy and major power consumers. So, shrinking size-weight-and-power (known as SWAP) scores to operational levels remains the biggest technological challenge to mounting lasers on aircraft.

Weight alone will likely bar 150-kw lasers from the MQ-1, so engineers have set their sights on building weapons for the Predator-C and its 3,000-pound payload capacity.

Then there is the issue of recharging the laser. That will occur in-air, over the course of several minutes. Company officials said that a drone-mounted laser would be good for five or six shots before having to recharge, but if shots come far enough apart, the laser will always retain enough power.

The military has been working for years to get laser technology aboard aircraft.

“The work that we’re doing with the General Atomics Reaper and the work that we did with the Boeing Phantom Eye starts to show it can be done, in terms of these long-range sensing and tracking capabilities that we need,” Missile Defense Agency Director Vice Adm. James Syring told reporters last month.

“We’ve been funded for years to develop high-energy laser systems. The maturity of our approach is further along than others because we’ve been working on it for a long time, for 15 years. [high-energy laser research is] coming out of the laboratory in a leakage-type way,” added Perry.

He also said once a laser system is developed, “new training” would be needed for drone operators.