The next region where the U.S. and Russia could clash is the Arctic 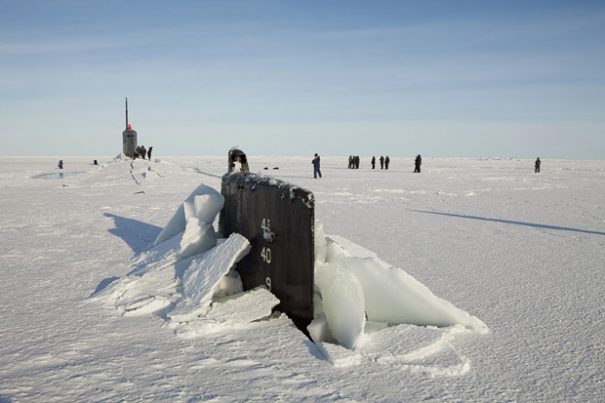 (NationalSecurity.news) As models predict temperatures to warm somewhat around the polar ice cap, the region’s natural resources – oil, gas, minerals – will become more accessible. With that in mind, there is already a race on between great powers to stake claims to those resources.

In particular, Reuters reports, the United States, with its regional allies, and Russia are becoming increasingly competitive in the Arctic, a competition that will only heat up in the world’s icy most extreme regions in the years ahead.

Geologists and surveyors have long speculated that the seabed underneath Arctic waters likely contain hundreds of billions of barrels’ worth of untapped oil. As changing weather patterns make the area increasingly accessible, it will become more valuable.

“The United States and Russia are geopolitical rivals and uneasy Arctic neighbors. More and more Russian and U.S. military forces are deploying on and under the Arctic Ocean,” Reuters reported.

However, both nations are approaching Arctic build-ups in a different manner. Moscow has the advantage on the ocean’s surface; however, Washington’s subs dominate underneath the seas. The U.S. and Russia both train Arctic ground forces (part of the U.S. Army’s 25th Division is based in Alaska), but the Pentagon is adding a northern strike force that includes high-tech stealth fighters, Reuters noted.

These are the results of Arctic military policies dating back to the Cold War. Russia chose to invest heavily in icebreakers to plow through the vast Arctic; the U.S. instead chose to develop stealthy warplanes and subs, both of which are particularly useful to the region.

During a visit earlier this year to Alaska, President Obama announced that the administration would make a push to build more icebreakers. The news was particularly welcomed by the U.S. Coast Guard, which has been neglected for years and which has a primary rescue mission in the Arctic. The Coast Guard operates all U.S. icebreakers but only has three; American companies own another two. The five ships must divide their time between north and south poles, busting through ice floes so commercial and military vessels can traverse safely.

“The administration will propose,” the White House explained on its official website, “to accelerate acquisition of a replacement heavy icebreaker to 2020 from 2022, begin planning for construction of additional icebreakers and call on Congress to work with the administration to provide sufficient resources to fund these critical investments.”

In the meantime, the Coast Guard has proposed rigging existing ships to act as icebreakers where floes tend to be thinner.

That said, the U.S. will continue to remain woefully behind Russia in icebreakers. The Russian government has 22 of them, while Russian industry owns an additional 19. Also, there are 11 additional icebreakers under construction or in various stages of planning.

To put these figures in context, Russia has far more Arctic coastline to navigate than does the United States. However, in a time of conflict, Russia could amass its icebreakers in order to carve paths for Russian warships far more quickly than the U.S. could.

The U.S., meanwhile, has based its strategy far less on surface ships and far more on submarines.

“The submarine is the best platform to operate in the Arctic,” Commander Jeff Bierley, skipper of the U.S. Navy submarine Seawolf, told Reuters, “because it can spend the majority of its time under the ice.”

And in this area, the U.S. has a major advantage: The U.S. Navy operates 41 attack subs that are capable of sailing under, and punching through, Arctic ice. A similar Russian force numbers only 25 vessels.

The Seawolf and a pair of sister vessels were designed specifically for Arctic operations. They and other Navy subs deploy far more regularly than do their Russian counterparts, in large part due to funding.

On the ice, both countries maintain similar numbers of similarly trained forces. The U.S. Army maintains three combat brigades in Alaska comprised of about 3,000 soldiers each. One brigade features paratroopers, another is in Stryker armored vehicles and a third is made up of reconnaissance troops, Reuters reported. In conjunction with the Canadian air force, these assets can be deployed anywhere in the Arctic.

The Russian ground force in the neighborhood is smaller; however, Russian troops regularly train in the Arctic.