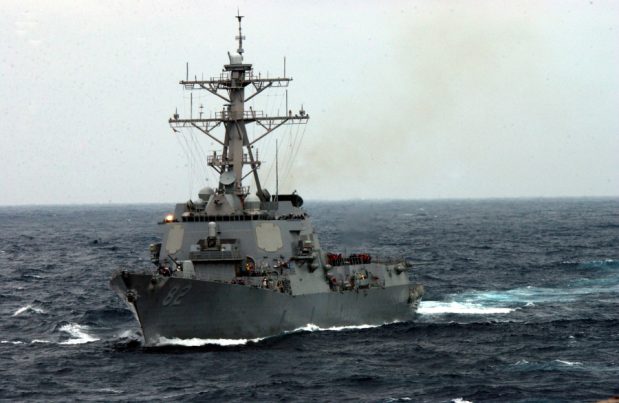 (NationalSecurity.news) The Obama Administration recently sent the USS Lassen, a guided missile destroyer, to within 12 nautical miles of a man-made reef near the Spratley Islands, which China claims is part of its sovereign territory.

As reported by The Wall Street Journal, the White House pledged future patrols in the region as it insisted that they were in line with international law, while Beijing’s policymakers began contemplating their next move.

International convention allows countries to claim territorial waters within 12 nautical miles of their coastal territory, but the U.S. and many other countries don’t recognize China’s claims to almost all of the South China Sea. Thus U.S. officials labeled Monday’s operation a “freedom of navigation” exercise.

“We have been clear that we take no position on competing territorial sovereignty claims to land features in the South China Sea,” a defense official told the paper. “We will fly, sail and operate anywhere in the world that international law allows.”

The WSJ cited the unnamed official as stating that future patrols would occur, in accordance with international law.

Beijing, meanwhile, warned Washington against future patrols, insisting that the 12-mile zone around the artificial islands was a matter of national sovereignty, despite the fact that the island-reefs were manufactured via industrial-strength sand dredging and that they are located thousands of miles away from Chinese shores.

“[W]e advise the U.S. to think carefully before acting, not to take reckless action and not to make trouble out of nothing,” China’s Foreign Minister Wang Yi said.

President Obama has promised to uphold America’s right to sail in international waters. The U.S. has significant economic and military interests in the region.

“This is a critically important principle, particularly in the South China Sea, because there are billions of dollars of commerce that flow through that region of the world every year, and maybe even more than that,” White House Press Secretary Josh Earnest said Oct. 26.

Defense officials had been prodding the administration to conduct patrols in the region as a way of demonstrating to the Chinese the futility of their claims and to assert the right of the United States and others to freely navigate those international waters.

Adm. Harry Harris, the head of U.S. Pacific Command, told a Senate panel in September: “I agree that the South China Sea is no more China’s than the Gulf of Mexico is Mexico’s. I think that we must exercise our freedom of navigation throughout the region.”

As reported by The Associated Press via Fox News, the Chinese Foreign Ministry stated further on its website: “The actions of the U.S. warship have threatened China’s sovereignty and security interests, jeopardized the safety of personnel and facilities on the reefs, and damaged regional peace and stability. The Chinese side expresses its strong dissatisfaction and resolute opposition.”

Meanwhile, the Philippines government welcomed the U.S. action, noting that it was necessary in order to maintain a “balance of power” in the region. China has a far larger, and more powerful, navy than do any of the regional Asian powers, including Malaysia, Vietnam, the Philippines, Indonesia and Singapore, each of which has staked various claims to natural resources believed to be plentiful in the region.

About 30 percent of global trade passes through the South China Sea, which is also home to rich fishing grounds and a potential wealth of undersea mineral deposits, Fox News reported.

As NationalSecurity.news previously reported, the U.S. had issued previous statements of its intention to challenge China’s claims of sovereignty in the region.