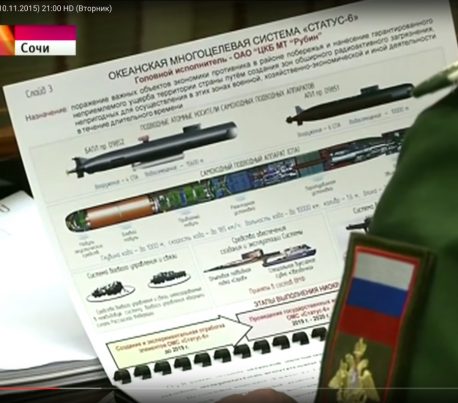 (NationalSecurity.news) In recent weeks Russian President Vladimir Putin attended a meeting of top generals in Moscow to discuss his vision for upgrading his military. According to published accounts, he gave a largely boring talk about defeating U.S. missile defense systems to top military brass that also appeared to be bored by the talk.

However, as reported by Foreign Policy, Russian TV cameras happened to catch a glimpse (see above) of a new nuclear weapon platform that, should Moscow decide to build, could be a game-changer.

The system? Status-6: An underwater sub-like drone that is designed to transport a thermonuclear weapon into foreign ports. If detonated, the weapon is capable of extinguishing major port cities like New York with blast and massive amounts of radioactive fallout.

“At the risk of understating things, this project is bat-shit crazy,” writes Jeffrey Lewis for Foreign Policy. “It harkens back to the most absurd moments of the Cold War, when nuclear strategists followed the logic of deterrence over the cliff and into the abyss. For his part, Putin seems positively nostalgic.”

But there is nothing phony about the project. In fact, the Russian government acted as if a major security breach had occurred following televised transmission of the briefing book images.

The offending images were summarily edited out of resultant broadcasts and, when asked about it, a Russian presidential spokesperson said, “Indeed, some secrets hit the camera lens, so were subsequently removed. We hope that in the future this will not happen again.”

This is not the first Western intelligence officials have heard of the Status-6. Earlier this fall, as we reported, details of a similar Russian nuclear underwater drone, Kanyon, were revealed by The Washington Free Beacon. Status-6 appears to be the same project, though the names are different (the WFB notes that “Kanyon” is the name given the project by the Pentagon, indicating it is a structured weapons program).

Still, the briefing book slide provides many additional details about the project. A Russian attack sub would be able to carry at least one, and possibly more, of the drones, which could then be launched remotely while at sea. Once set free, the drones may be able to travel about 10,000 nautical kilometers (5,400 nautical miles). It would be designed in such a way it could be remotely navigated into a U.S. port and detonate its “combat payload.” It appears designed to remain stealthy and underwater its entire voyage, thus avoiding U.S. missiles and other countermeasures.

And while those details are obviously concerning, there is this: The nuclear warhead’s purpose is to damage “the important components of the adversary’s economy in a coastal area and [inflict] unacceptable damage to a country’s territory by creating wide radioactive contamination that would be unsuitable for military, economic or other activity for long periods of time.”

So the warhead wouldn’t just be nuclear; the weapon will be designed as a “dirty nuke,” and one far larger than any terrorist group could ever hope to construct.

“This isn’t the sort of dirty bomb that terrorists might build to spread a small amount of radioactive material about and cause panic. We’re talking about a massive, megaton-sized thermonuclear weapon designed to produce significant, long-lasting radiation effects,” writes Lewis.

It may be too soon to judge the veracity of Status-6, but it’s a safe bet the Pentagon is already looking into the matter and examining ways to detect and defeat such systems.

Earlier, the Washington Free Beacon reported that that details surrounding the secret Russian drone sub are closely held within the U.S. government and intelligence community.