The U.S. Navy is once again realizing the importance of a core mission – ship killing 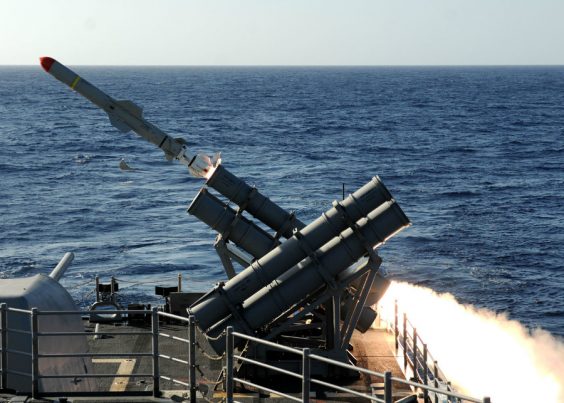 (NationalSecurity.news) It may seem like an obvious function of the U.S. Navy – destroying and sinking the ships of adversaries – but over the past two-and-a-half decades the nation’s sea service had lost sight of one of its core missions, say some experts. But that’s set to change.

As reported by Popular Mechanics, for 25 years the Navy neglected this core mission, but as Russia and China rush to modernize their fleets, targeting and sinking enemy vessels is once more becoming a priority, in large part by repurposing missiles to be ship-killers.

The de-emphasis on ship killing began at the end of the Cold War, when Department of Defense budget cuts began in the early 1990s as part of President Bill Clinton’s efforts to glean a “peace dividend” that would result partly in budgetary savings and partly in increased domestic spending.

The results were understandable, given the demise of the once-vaunted Soviet navy: Cutbacks in the number of U.S. Navy ships, subs and personnel and delayed replacement of the venerable Harpoon ship-killing missile, Popular Mechanics noted. At the time, the U.S. Navy was in a class all by itself in terms of naval power projection.

Following the 9/11 attacks, priorities were shifted further away from this core mission, in support of land operations in Afghanistan and Iraq, as well as the Horn of Africa, because there was not much need for anti-ship missiles.

However, as Popular Mechanics further reported:

In the meantime, the rest of the world has not stood still. The Russian Navy is crawling back from starvation budgets of the last twenty years. Russia is an enthusiastic user of naval forces, sending them wherever Russian interests lie, in places like Iran, Syria, and Venezuela.

The biggest concern is China, which has made modernizing air and naval forces the number one defense priority. The People’s Liberation Army Navy now totals more than 300 ships of all types, and China’s shipyards are continuously cranking out new aircraft carriers, destroyers, frigates, corvettes, submarines, and amphibious vessels.

These developments have led the U.S. Navy, belatedly, to begin researching ways to spread anti-ship weapons across a diminishing fleet. One solution being examined is to adapt existing missiles for an anti-ship role, especially the SM-6 air defense missile, which is now entering the fleet.

The SM-6 is the latest version of the legacy Standard Missile air defense weapon which has been aboard Navy ships for decades. The SM-6 is capable of engaging aircraft, ballistic and cruise missiles and can even be provided targeting data by Navy E-2D Hawkeye aircraft. Almost all Navy ships will carry the SM-6 in vertical launch silos; most ships will have 100 or more silos, PM reported.

That said, the older Harpoon missiles had to be carried in external canister launchers and that limited the number of missiles a ship could carry.

In a separate report, the U.S. Naval Institute reported that the sea service is currently looking to repurpose older weapons systems with an emphasis on distributed ship-killing:

The surface navy in January unveiled a “distributed lethality” concept that would guide its operational thinking going forward: if every ship on the ocean has lethal offensive capabilities, no ship can be overlooked by the enemy, changing the enemy’s behavior. Many ships have strictly defensive missions – such as a cruiser protecting the aircraft carrier – but the Navy is now looking at how to put offensive systems onto those ships.

Giving the new SM-6 offensive capabilities is one of the concepts being examined, but weapons experts noted that the SM-6’s warhead may be too small to actually sink enemy surface combatants.

Other weapons are also being considered.

“We still have a requirement for a Tomahawk cruise missile to attack surface ships sitting on the books – in fact, it’s been reiterated for the past 15 years that we still have that requirement,” Director of Surface Warfare Rear Adm. Peter Fanta said during a recent panel discussion at the America Society of Naval Engineers’ Combat Systems Symposium on Dec. 1.

“It’s amazing what you do when you dust off an old requirement and say I’m going to do this again,” he added, according to USNI. “Let me put it this way: we know what the Tomahawk is capable of – the reason we got rid of it was because our sensors were not long-range enough to keep up with the range of the Tomahawk. Our sensors have evolved to the position now where we can track and target things out to the range of a Tomahawk, so now we have a need for something Tomahawk-esque to go out and reach out that far.”