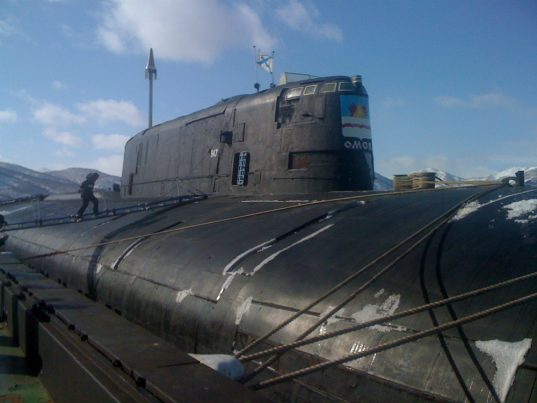 (NationalSecurity.news) After decades of decline and obsolescence, the Russian navy is currently undergoing rapid modernization and that should be of some concern to Pentagon planners, a U.S. intelligence report is warning.

As reported by the Washington Free Beacon, the report from the Office of Naval Intelligence [PDF] warns that Russian naval forces are quickly being modernized with new advanced submarines and lethal ballistic and cruise missiles, in particular.

Included in the buildup are three new classes of submarines and a number of new warship types, the report notes, while warning that the vessels will “provide a flexible platform for Russia to demonstrate offensive capability, threaten neighbors, project power regionally, and advance President Putin’s stated goal of returning Russia to clear great power status.”

After the Soviet Union disintegrated in 1991 the Russian navy was dramatically reduced in size, while several new weapons systems were canceled and others mothballed. In general, the navy fell into disrepair and many ships quickly became obsolete.

But under Russian President Vladimir Putin, the Russian military in general is getting substantial funding increases for new systems, and that includes the navy, with his goal of restoring the military to Soviet-era power by 2020, the report, titled, “The Russian Navy: A Historic Transition,” said.

Military analysts view the Naval Intelligence report as further evidence that the U.S. government believes Russia, following its war with Georgia in 2008 and its military annexation of Ukraine’s Crimea in 2014, as a growing strategic threat.

In addition to building new systems for its own military, Russia is also exporting them to other countries, the report noted.

“The quantity and quality of the ships, submarines, and armaments sold will transform the current capabilities of recipient states and, in some cases, potentially enable them to improve the quality of indigenous arms production,” it notes.

Among some of the most recent sales, Russia has sent Kilo-class subs to Algeria and Vietnam, Gepard-class frigates to Vietnam and a modified Kiev-class aircraft carrier to India. Also, sales of the high performing Club missile – the export version of the Kalibr class of missiles – have taken place over the past decade.

“This proliferation of high grade weapons is one of the most troubling aspects of Russian Federation adventurism worldwide,” the report said.

The report notes that Russian naval commanders have noted that the sea service’s most important project is boosting the submarine force, which currently consists of 56 vessels: 12 nuclear missile submarines, 26 cruise-missile equipped submarines, and 18 attack boats.

Naval experts praised the ONI’s report and said it was past time for the Pentagon to get serious about Russia’s naval capabilities.

“I’m glad that ONI is now looking at the Russian navy threat and publishing on it,” Mark Schneider, a former Pentagon strategic nuclear policymaker, told the WFB.

Like the U.S. Navy, the Russian navy is also investing heavily in directed energy (laser) platforms and rail gun technology.