Is Iran capable of sinking a U.S. aircraft carrier? 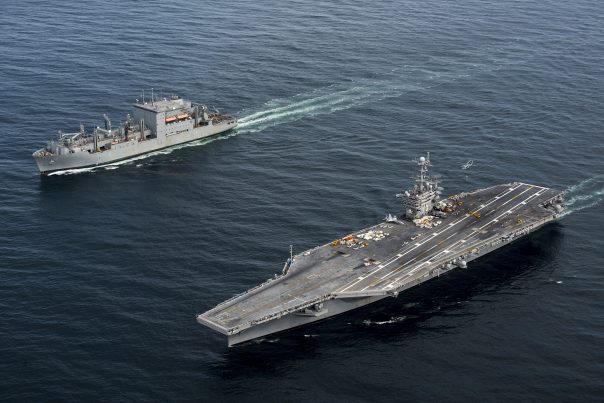 (NationalSecurity.news) In recent days reports surfaced that Iran conducted scheduled drills near the USS Harry S. Truman carrier and battle group, firing rockets some about 1,500 yards away from the massive vessel – a claim that Iran is denying.

“Firing weapons so close to passing coalition ships and commercial traffic within an internationally recognized maritime traffic lane is unsafe, unprofessional and inconsistent with international maritime law,” said CENTCOM spokesman Commander Kyle Raines, in a statement. He did add, however, that the Iranians were clearly not firing in the direction of the U.S. ships.

CENTCOM further noted that the smallish group of IRGC vessels fired unguided rockets, and while not especially threatening to the Harry S. Truman in small numbers, a lucky shot could definitely have inflicted damage on the vessel and to the aircraft it carries. At close range, The National Interest observed, even unguided weapons have a better-than-average chance of hitting a target.

“At best, the Iranian boats might have achieved a ‘mission kill’ on the U.S. and French vessels,” TNI reported. However, “it’s very unlikely that the IRGC vessels could have actually sunk Harry S. Truman or its escorts.”

But how could Iran achieve such a feat? TNI notes:

Iranian forces would have had to employ their small attack craft en masse to have a chance of doing real damage to the U.S. Navy task force—as the Millennium Challenge 2002 simulation demonstrated. Indeed, the IRGC has rehearsed such an attack on a mock-up of the USS Nimitz in the Straits of Hormuz in previously during an exercise called “Ninth Great Prophet.”

Those drills involved swarms of speedboats armed with cruise missiles and rockets, as well as medium- and large-caliber torpedoes, sea mines, heavy machine guns and shoulder-fired surface-to-air missiles. The swarming boats were augmented with shore-based missiles and other ordnance.

The U.S. Navy’s Littoral Combat Ship was developed in large part to combat such a swarming attack, but those vessels are not yet fitted with an appropriate missile system.

No, the most likely weapon Iran or another regional power would deploy that could actually do real damage to U.S. Navy and allied vessels are sea mines, TNI said, nothing that of 19 U.S. ships sunk or damaged since World War II, 15 have been due to sea mines.

Three U.S. ships were crippled or damaged due to Iraqi sea mines during the first Gulf War.