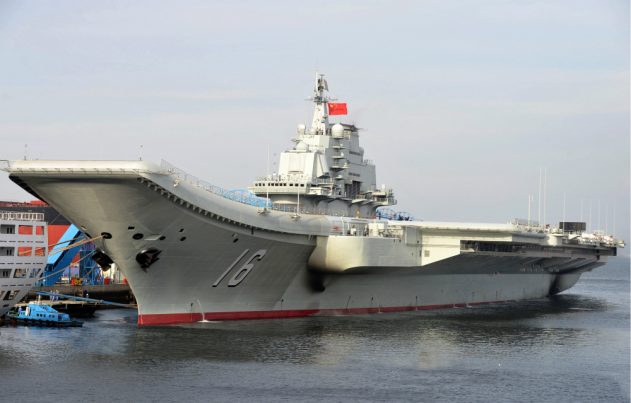 (NationalSecurity.news) It will be China’s second aircraft carrier but the first one built indigenously.

Chinese defense officials have confirmed the construction late last month, according to The Diplomat, which is taking place at the port city of Dalian, in northeastern China.

China’s first carrier, the Liaoning, was Russian-made and purchased from China. It was refurbished and began sea trials in 2012 after being commissioned.

There have been earlier reports that China was constructing a second aircraft carrier. In October, NationalSecurity.news published a report that questioned whether the keel laid at Dalian was actually going to be a carrier, but that now appears to be the case, following the first-ever confirmation from Chinese military officials.

Defense Ministry spokesman Yang Yujun told Chinese media that the “relevant authority started the research and development of China’s second aircraft carrier, which is currently under independent design and construction.” He went on to emphasize that the ship was domestically “designed” by Beijing.

“Earlier this fall, IHS Jane’s 360 carried photographs that appeared to show the carrier under construction at the Dalian shipyard,” The Diplomat reported. “Back in March, Chinese media ran quotes from Chinese admirals about the new aircraft carrier – including news on the development of an electromagnetic launch system.”

That said, however, Yang told reporters that fighter jets operating on the new carrier will still utilize a ski-jump ramp to take off. The carrier will base J-15 fighters like those already in use aboard the Liaoning, as well as additional “ship-based aircraft” that analysts believe will include the J-31, a fifth-generation warplane currently in development.

Yang, a senior colonel, went on to say that the new carrier “will have new improvements in many respects” but did not go into detail.

Some Western naval analysts believe that the Chinese People’s Liberation Army Navy is using the Liaoning as a training platform mostly, to learn how to operate a carrier. The new vessel, they say, will be much more operational.

The Chinese carriers, at 50,000 tons displaced, are about half the size of U.S. Nimitz-class carriers at 100,000 tons displaced. The new carrier will be conventionally powered rather than powered by a nuclear reactor like the U.S. ships.

Yang did not give a timetable for the new carrier’s completion.

Chinese naval planners have said the PLAN should eventually have three operational carriers in its fleet, The Diplomat noted.