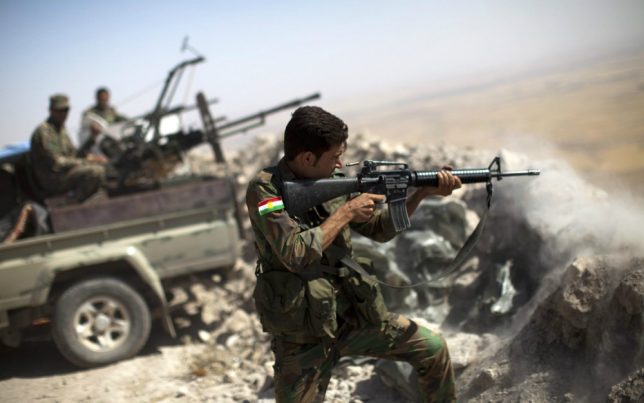 (NationalSecurity.news) Critics of President Obama’s light touch in the war against the Islamic State of Iraq and Syria may have inadvertently gotten a boost in recent days after the Pentagon released its current estimate of the number of ISIS fighters.

As reported by the Washington Free Beacon, Pentagon officials put the number of ISIS fighters at between 20,000 and 30,000, which, if accurate, would mean the Islamic State has roughly the same number of forces it did before Obama ordered the strikes in 2014.

A spokesman for Operation Inherent Resolve, the name assigned to the U.S. military intervention against ISIS, provided reporters with official figures at a Pentagon briefing Jan. 6.

A reporter asked the spokesman, Col. Steve Warren, what the military’s best estimate was “on the size of the ISIS fighting force” in the region.

In September 2014, a CIA assessment about a month after Obama ordered airstrikes to begin put the number of fighters at between 20,000 and 31,000 throughout Iraq and Syria. If the Pentagon’s current estimate is accurate, then the airstrike campaign has done little more than put additional wear on aging fighter aircraft and further deplete U.S. ordnance stocks.

That said, the White House has regularly touted the efforts of the U.S.-led coalition against ISIS, claiming tens of thousands of its fighters have been killed. One official said in October, as reported by USA Today, that 20,000 ISIS fighters had been killed after a year of operations.

Also, Obama himself said in December that the United States was hitting ISIS “harder than ever,” all the while defending his limited airstrike campaign as sufficient to counter the Islamic State which many feel is growing in power.

In Congress there are bipartisan calls for the president to take a much more aggressive posture against ISIS, but Obama does not appear likely to do that in his final year in office.

Other analysts say that ISIS death toll figures may very well be accurate, but that the militant organization is simply replenishing its numbers as quickly as fighters are being killed. One of the primary ways the group is doing that is by recruiting foreign fighters, intelligence officials and lawmakers in the know have said, The Daily Beast has reported.

“The numbers are not moving in our favor,” Senate Foreign Relations Committee Chairman Bob Corker (R-TN) told The Daily Beast nearly a year ago.

All the more reason to get serious about taking ISIS on, say others.

In December in a Wall Street Journal column, Sens. John McCain, R-Ariz., and Lindsay Graham, R-S.C., the latter in the race for the GOP presidential nomination at the time, said Obama’s strategy of “ultimately” prevailing against ISIS was failing.

“After more than a year of an indecisive military campaign, the U.S. still does not have the initiative. The threat is growing and evolving faster than the administration’s efforts to counter it,” they wrote. “What’s needed is a comprehensive civil-military strategy to destroy ISIS quickly, while creating conditions that can prevent it, or a threat like it, from ever re-emerging.”