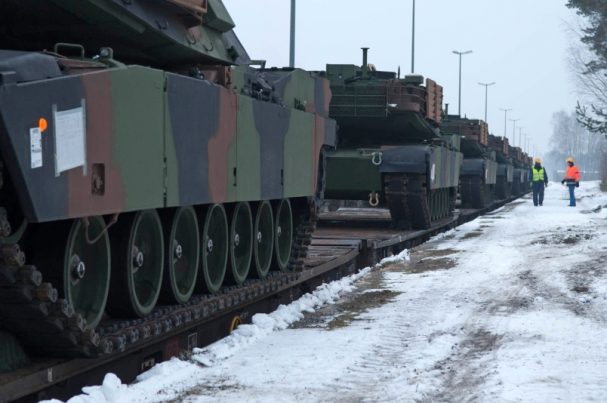 (NationalSecurity.news) Not that the Pentagon has ever been overtly public about its war preparations, but quietly, steadily the Defense Department is getting ready to fight in Europe.

That is, if it comes to that.

The most recent evidence that the Pentagon considers the likelihood of war in Europe much higher than, say, in the years following the end of the [first] Cold War with [the then-USSR-allied] Russia, is the deployment of U.S. Marine Abrams tanks and heavy artillery in secret caves in Norway.

As reported by CNN, the aim is to bolster U.S. military capabilities along NATO’s frontier with an increasingly belligerent Russia.

“Any gear that is forward-deployed both reduces cost and speeds up our ability to support operations in crisis, so we’re able to fall in on gear that is ready-to-go and respond to whatever that crisis may be,” Col. William Bentley, operations officer for the 2nd Marine Expeditionary Brigade, said in a statement last week.

The deployment of the new equipment to the Cold War-era caves is reflective of the United States’ and NATO’s rising concern over a Russia that is rearming and reasserting itself in the region and globally. Russia shares a nearly 122-mile-long common border with Norway, a border that was heavily militarized during the Cold War. Also, Russia’s Northern Fleet is headquartered in Murmansk, about 100 miles from the border.

In October, Norway’s Chief of Defense, Adm. Haakon Bruun-Hanssen, told reporters that Russia has “shown that they are willing to use military force to achieve political ambitions.”

The Norwegian caves, which are climate-controlled, are located throughout the central portions of the country. U.S. equipment was first stored there in 1981, at the beginning of the Reagan administration and came to be seen as part of President Ronald Reagan’s defense buildup some say eventually led to the Soviet Union’s collapse a decade later.

Following the end of the Cold War the U.S. questioned the need to continue storing equipment there and maintaining the cave complex, said Magnus Nordenman, director of the Transatlantic Security Initiative at the Atlantic Council.

In a bid to save the cave facilities, the Norwegian government agreed to shoulder the cost of maintaining the caves during the 1990s, according to Nordenman, who has discussed the caves with the Norwegian Ministry of Defense.

The secured cave complex is a modern and robust facility, staffed by about 100 Norwegian and U.S. personnel, and it contains enough equipment to support 15,000 Marines, according to Nordenman. The equipment in the caves has been used to support operations in Iraq.

Of the equipment being stored, about 6,500 pieces will be used in an upcoming training exercise, Cold Response 16, which will be conducted later this month with NATO allies, the Marines said.

The announced cave deployment plan comes within days of a Defense Department announcement that it was spending $3.4 billion for the European Reassurance Initiative, to better deter Russian aggression directed at NATO allies. That initiative will include forward-deploying more equipment and prepositioning it in the Baltic States, Poland and central Europe.