Report: U.S. aircraft carriers may be losing their military primacy 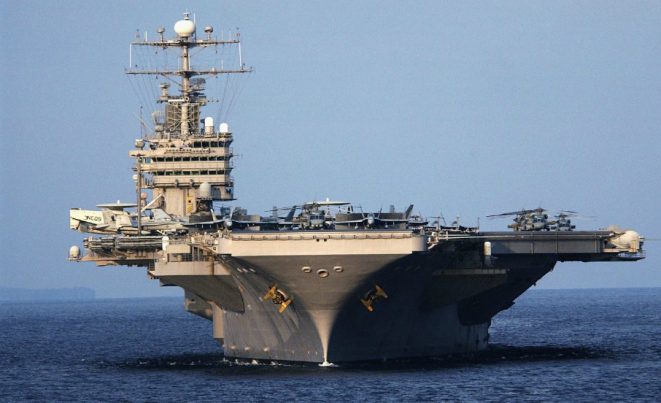 (NationalSecurity.news) A defense think tank has issued a report suggesting the era of military supremacy for U.S. Navy aircraft carriers may be coming to an end as other great powers develop new weapons and technology that could imperil or thwart the carrier’s mission.

The report, by the Center for a New American Security, acknowledges that other nations likely could never match the U.S. carrier fleet, either in size or technological prowess. But analysts with the think tank say that’s not going to be necessary, given advances in ballistic missile and submarine technologies by Russia and China, in particular.

Titled, “Red Alert: The Growing Threat to U.S. Aircraft Carriers,” notes in particular China is rapidly building an A2/AD – anti-access/area denial – capability that is designed to keep American carriers so far from Chinese shores and other areas where Beijing may fight that they are essentially made ineffectual.

As reported by the Washington Post, as threats abroad increase, the United States will be forced to either “operate its carriers at ever-increasing ranges … or assume high levels of risk in both blood and treasure.”

China has become increasingly assertive and aggressive in the South China Sea as its military and naval power have both increased over the past several years, making outsized claims that Beijing intends to enforce if challenged. At the same time the U.S. and its Asian allies in the region have said that Chinese claims must not be allowed to restrict commerce conducted via South China Sea waters, through which trillions of dollars in annual trade are shipped.

The report focuses on China’s capabilities because of its “emphasis on long-range anti-ship missile procurement.” This, coupled with its growing tech base, qualifies China as the “pacing threat” to the U.S. military. China, however, is not the sole architect of an A2/AD strategy designed to deter U.S. operations. In the Baltic, Russia’s naval base in Kaliningrad is known to house a sophisticated air defense network and anti-ship missiles. NATO commanders also have warned of Russian A2/AD buildup around Syria, as Russia has moved advanced surface-to-air missiles into its airbase there as well as a flotilla of ships with robust anti-air capabilities.

Other regional powers are also developing more sophisticated A2/AD capabilities, making navigation for carriers and other U.S. warships more hazardous. They include the use of drones, advanced anti-ship missiles and newer aircraft. But operating as it always has is putting the most capable U.S. naval assets at risk, the report says. Researchers note this is particularly relevant as carrier groups have reduced their long-range strike capability in lieu of being able to fly more sorties, albeit at shorter ranges.

“Operating the carrier in the face of increasingly lethal and precise munitions will thus require the United States to expose a multi-billion dollar asset to high levels of risk in the event of a conflict,” the report says. “An adversary with A2/AD capabilities would likely launch a saturation attack against the carrier from a variety of platforms and directions. Such an attack would be difficult – if not impossible – to defend against.”

In recent days China’s A2/AD capability made waves after it was reported that Beijing deployed sophisticated HQ-9 air defense missiles to Woody Island, one of a series of disputed atolls in the South China Sea also claimed by Vietnam and Taiwan. The missile system, if reinforced and deployed on additional islands in the region, that will present special problems for the U.S. and Asian powers.

The report discussed medium- and long-range missile threats from Chinese-based bombers and anti-ship ballistic missiles including the DF-21D and DF-26, with ranges of 810 and 1,620 miles respectively, both of which “represent a significant threat to the carrier.”

The report also said that if the DF-26 operates as accurately as the Chinese claim, then it could also hit the U.S. territory of Guam, where there are significant naval assets.

The report recommended the U.S., in the future, put more reliance on submarines that can avoid detection and long-range, carrier-based drones that carry missiles. Both strategies would reduce the A2/AD umbrella, the think tank concluded.

The report also noted that the Navy’s futuristic railgun could also be used as an A2/AD countermeasure.