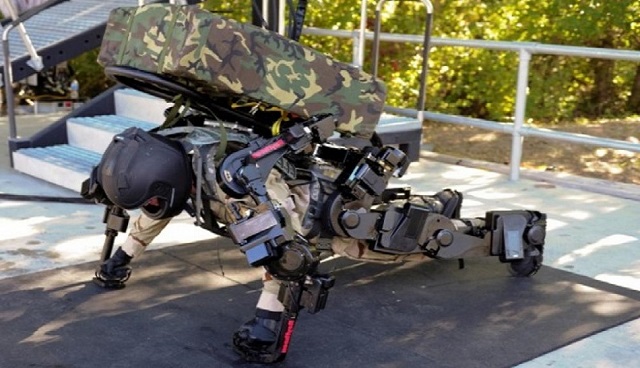 (NationalSecurity.news) Even as most of the U.S. defense talk centers around combatting the Islamic State and negotiating a potential cease fire in Syria, the Pentagon is quietly pursuing a host of new, exotic weapons it would use to deter a resurgent Russia and an increasingly aggressive China.

As reported by the Washington Post, Pentagon officials have begun openly discussing how best to utilize artificial intelligence and machine-learning to create robotic weapons, “human-machine teams,” and soldiers that are enhanced with super powers. And while many think this is little more than the stuff of Hollywood scripts, Defense Dept. officials note they have already decided such systems are the best way to nullify major improvements in Russian and Chinese military hardware and capabilities.

These potentially revolutionary U.S. weapons systems were explained in an interview last week by Robert Work, the deputy secretary of defense, and Air Force Gen. Paul Selva, the vice chairman of the Joint Chiefs of Staff. Their comments were the latest in a series of unusual recent disclosures about what, until a few months ago, was some of the military’s most secret research.

“This is how we will make our battle networks more powerful, hopefully, and inject enough uncertainty in the minds of the Russians and the Chinese that, you know, if they ever did come to blows with us, would be able to prevail in a conventional [non-nuclear] way. That, for me, is the definition of conventional deterrence,” Work explained.

The shift to a high-tech strategy is known within Pentagon walls unceremoniously – as the “third offset strategy,” following a pair of earlier “offsets” that countered Soviet military advances during the Cold War. The first offset saw the development of tactical nuclear weapons; the second involved development of precision-guided ordnance. The third offset is premised on the belief that smart, robotic weapons will restore a deterrent effect that has been degraded by military advances in Russia and China.

During his confirmation hearing in July Marine Gen. Joseph F. Dunford, chairman of the Joint Chiefs of Staff, said early on that Russia posed the greatest “existential” threat to U.S. national security. And Work added, in a recent speech, that because the U.S. has focused overwhelmingly on the Middle East since 2001, “our program has been slow to adapt as these high-end threats have started to re-emerge.”

There is money in the 2017 Pentagon budget to seriously jump-start this third offset: $3 billion for the development of advanced weaponry that could, for instance, counter a long-range Chinese attack on U.S. naval forces; $3 billion to upgrade undersea systems; $3 billion for human-machine teaming, as well as “swarming” operations by unmanned drones; $1.7 billion for cyber security and electronic systems that employ artificial technology; and $500 million for testing of new concepts and war-gaming, the Post reported.

Though often criticized as responding too slowly to Russian and Chinese military advances, the Obama administration appears to have sided with those in the Pentagon who believe that the pursuit and deployment of such high-tech weaponry is vital to counter Russian and Chinese threats.

The shift to technology got help last summer from the Defense Science Board, which looked into the feasibility of autonomous, robotic weapons. “Imagine if we are unprepared to counter such capabilities in the hands of our adversaries,” the board noted ominously.

While such research is generally kept under wraps or, at best spoken of only minimally in public, the full-on embrace by the Pentagon appears to be part of the messaging strategy aimed at Moscow and Beijing – namely, that the U.S. has the technological prowess and the resources to pursue such weaponry.

That said, Russia is also working to develop combat robotics, as well as personal robot-like outerwear for troops that bolsters strength, endurance and overall power.

The Pentagon’s decision to upgrade to the third offset could be due, in part, to rising concerns about Russian and Chinese development in the same realm. As Defense One reported in December, Work told a forum at the Center for a New American Century that both nations were working to develop highly autonomous robotic weaponry.

“We know that China is already investing heavily in robotics and autonomy and the Russian Chief of General Staff [Valery Vasilevich] Gerasimov recently said that the Russian military is preparing to fight on a roboticized battlefield and he said, and I quote, ‘In the near future, it is possible that a complete roboticized unit will be created capable of independently conducting military operations,’” Work said.