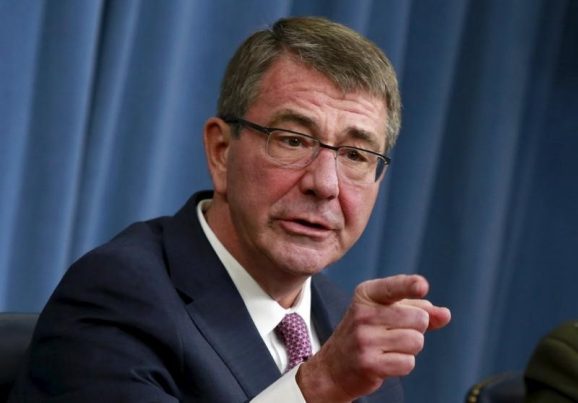 (NationalSecurity.news) GOA, India (Reuters) – U.S. Defence Secretary Ash Carter began a three-day visit to India on Sunday, seeking to advance a relatively new defense relationship with a country Washington sees as a counterweight to the growing power of China.

In a sign of the importance Carter places on improving defense ties with India, the visit is his second in less than a year, and it kicks off in Goa, the west coast home state of Defence Minister Manohar Parrikar.

For India, closer U.S. defense ties would bring greater access to American technology, and it too has been alarmed by China’s naval forays in the Indian Ocean. But India has been historically wary of drawing too near to any one country.

“India’s very reluctant to be seen as too close to the United States, but the Pentagon is very bullish on this relationship,” said Shane Mason, a research associate at the Stimson Center in Washington.

It is also a favored initiative of Carter, who established a special cell within the Pentagon last year to promote cooperation with India.

“There’s no question about where the United States-India relationship is going,” Carter said on Friday, at a talk at the Council on Foreign Relations in New York. “We can control and influence the pace, and I want to do that.”

The U.S. military has made clear it would like to do more with India, especially in countering China’s moves.

Last month, Admiral Harry Harris, the commander of U.S. Pacific Command, said the United States wanted to expand the naval exercises it held with India each year into joint operations across the Asia-Pacific.

But India, which has never carried out joint patrols with another country, said there were no such plans.

“The Indians are being careful because it’s their neighborhood,” said a U.S. congressional source familiar with U.S.-India military discussions. “It’s been a long-standing Indian policy to deal with China on a bilateral basis.”

U.S. defense manufacturers hope closer ties will boost their own prospects in India, which is one of the world’s biggest defense spenders but still has major gaps in its military capabilities.

India has been looking to rebuild its aging air force and last week Lockheed Martin and Boeing pitched their fighter planes to its defense ministry.

In a statement, Boeing said it was in talks with India about the possibility of making F/A-18E/F Super Hornet aircraft in India.

But deeper security cooperation has been tricky, because India has for more than 10 years demurred at signing three “foundational” defense agreements that would streamline military interactions.

India is concerned that the pacts, including the Logistics Support Agreement (LSA) that allows the two militaries to access each other’s bases, could draw it into an undeclared military alliance with the United States.

Ahead of Carter’s trip, an Indian defense source said both sides were eager to conclude the negotiations on the LSA.

Nonetheless, signing them “would indicate that the Indian government is more willing to work with the U.S., even if it means that they’re going to take some political heat,” said Schwartz.