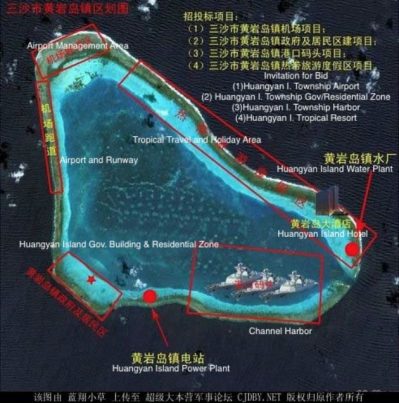 (NationalSecurity.news) Despite pressure from the United States and a host of ASEAN nations who have all expressed concern over China’s increasing militarization of the South China Sea, Beijing seems undeterred and is continuing to expand its power in the region.

That was made evident, once again, in recent days by China’s release of a plan for a new military buildup on an island that was claimed by the Philippines in the Scarborough Shoal in the Spratly Island chain. The plan calls for future deployment of Chinese warships close to where U.S. Navy Ships are to be stationed in the future, the Washington Free Beacon reported.

U.S. intelligence officials obtained details of the plan over the last several months, defense officials said. The plans were confirmed in March when a web site for Chinese military enthusiasts posted a detailed dredging plan for the shoal that includes a runway, housing, power systems and a harbor deep enough to accommodate Chinese warships.

The shoal is located about 140-150 miles from the Philippine coast – well within the country’s internationally recognized 200-mile economic exclusion zone. The atoll is claimed by the Philippines but it has been under Chinese control since 2012.

Beijing is engaged in what the Obama administration and top Pentagon military officials have characterized as an attempt at gradually taking over the entire South China Sea, which Beijing has openly claimed. That takeover, the Pentagon has noted, threatens some $5.3 trillion in annual trade that passes through what are legally international waters, the WFB noted.

The anticipated buildup on the Scarborough Shoal is particularly alarming, however, for the potential it holds of escalating tensions and the possibility of conflict in the region, experts note. The shoal’s proximity to the Philippines is problematic given that Manila has a security agreement with Washington and recently agreed to bolster defense cooperation in the face of Chinese aggression.

President Obama has discussed the aggressive expansion with Chinese President Xi Jinping, but apparently the issue has yet to be solved.

Defense and foreign policy experts have said they believe China will continue its expansion into the region as long as it remains unchallenged, as Beijing obviously believes it is in the country’s own interests.

The South China Sea is believed to hold rich oil and mineral deposits, which is one reaons why portions of it are claimed by more than a half-dozen countries.