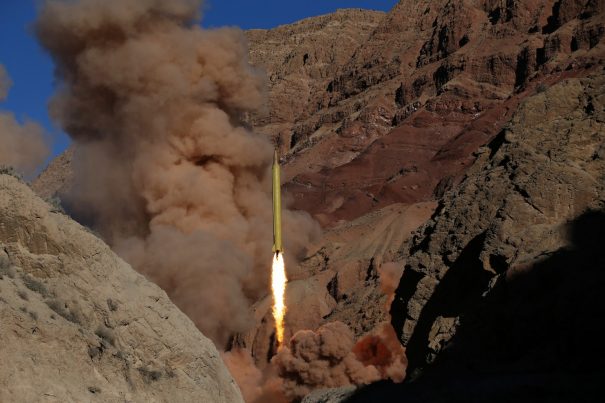 (NationalSecurity.news) Iran recently publicized a third underground missile silo while also showing the launch of a single ballistic missile through the top of a mountain, the Washington Free Beacon reported last week.

Two missiles were launched in March, including the one shown in the video which was identified as a Qiam-1, or Uprising-1, a smaller variant of Iran’s Shahab-3 missile, the WFB noted.

Pentagon spokesman Peter Cook said early last week that he could not confirm the latest Iranian missile test but is aware of the reports, the site noted.

The Pentagon has been developing special “bunker-buster” ordnance capable of penetrating deep underground and through reinforced bunkers like those Iran has built.

“Iran has to abide by U.N. resolutions with regard to ballistic missiles tests, and if they have violated or not been consistent with those resolutions, that clearly would be a concern for us,” Cook told the WFB.

Thus far Iran has produced three videos of underground missile and storage facilities, no doubt aimed at highlighting Tehran’s defiance of a United Nations resolution on the Iranian nuclear deal calling for a halt to nuclear-related missile tests. Despite the tests Iran has not faced any fallout from the U.S. or the UN.

“The missile test was the last stage of an exercise held by the Islamic Revolutionary Guards Corps aerospace division that the report said was part of several missiles being fired from different parts of the country,” the WFB reported.

In March, the Washington Post reported that Iran vowed to continue testing missiles, in violation of its UN and U.S. accords.

Brig. Gen. Amir Ali Hajizadeh, a senior commander for the Iranian Revolutionary Guard Corps that runs Iran’s missile program, told state TV that it has more missiles ready to launch, and they are for defensive purposes.

“Iran’s missile program will not stop under any circumstances,” Hajizadeh said. “We are always ready to defend the country against any aggressor.”

“The Islamic Republic of Iran will not compromise over its security and defensive power,” he said, and will “continue its completely defensive and legitimate missile program.”

U.S. intelligence officials have said they don’t believe the Iranian tests are merely defensive, citing the nature of the missiles being tested.