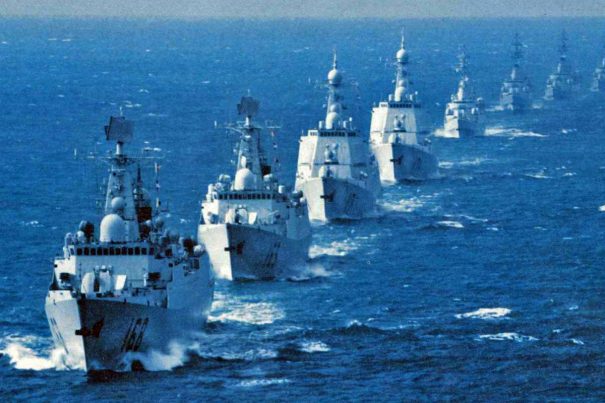 (NationalSecurity.news) In the wake of a ruling by an international court that China’s outsized territorial claims in the South China Sea were illegal, some of Beijing’s top military officers have ramped up their rhetoric, threatening the U.S. and Japanese navies as well as others in the region.

In recent days a senior Chinese admiral said that so-called “freedom of navigation” patrols that the U.S. Navy was engaging in to ensure open sea lanes through one of the world’s busiest trade corridors could end “in disaster” following a ruling in The Hague that China could not simply claim international waters and land structures as its own.

For its part, Beijing has refused to recognize the ruling by an arbitration court invalidating its sweeping territorial claims, and did not take part in any of the proceedings, Reuters reported. And the Chinese government has reacted angrily to demands by the United States and Japan for it to adhere to the ruling.

The case was brought by The Philippines after Chinese forces claimed a portion of Scarborough Shoal, which had traditionally belonged to Manila.

Though the Chinese have made aggressive moves throughout the South China Sea, Beijing has blamed Washington for stirring up tension in the region, which is a strategic trade waterway in which more than $5 trillion worth of goods move each year.

The U.S. has been conducting freedom of navigation patrols close to China-held islands. Beijing has responded by bolstering its military presence on some of the manmade atolls and islands, including adding airstrips, combat aircraft, long-distance radar and air defense missiles.

Speaking behind closed doors at a forum in Beijing on Saturday evening, Sun Jianguo, an admiral and Deputy Chief of the Joint Staff Department of the powerful Central Military Commission, said the freedom of navigation issue was bogus and one that certain countries repeatedly hyped up.

“When has freedom of navigation in the South China Sea ever been affected? It has not, whether in the past or now, and in the future there won’t be a problem as long as nobody plays tricks,” he said, according to a transcript of his comments seen by Reuters.

China is the biggest beneficiary of freedom of navigation in the South China Sea and is not about to allow anyone to damage it, Sun said.

“But China consistently opposes so-called military freedom of navigation which brings with it a military threat, and which challenges and disrespects the international law of the sea,” Sun said.

“Japan is not a state directly involved in the South China Sea issue, and thus should exercise caution in its own words and deeds, and stop hyping up and interfering”, Li said following the ruling in The Hague, according to Xinhua.

Japanese press reported further that Abe informed Li that the rules-based international order must be respected.

China claims most of the South China Sea. Brunei, Malaysia, the Philippines, Taiwan and Vietnam have rival claims.