Did Putin ‘weaponize’ Wikileaks to sabotage the U.S. presidential election? 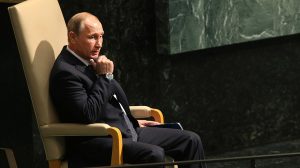 (NationalSecurity.news) GOP presidential nominee Donald J. Trump has said he “admires” Russian President Vladimir Putin and has called him a great “leader” he thinks he can work with. Democratic presidential nominee Hillary Clinton, by comparison, did not successfully “reset” relations with Russia as secretary of state, and she and her husband, ex-President Bill Clinton, have benefitted financially from shady business deals many believe enhanced Moscow’s security while harming ours.

So, why would Putin’s Russia engineer the hacking of the Democratic National Committee’s email servers and then leak at least some of them to WikiLeaks? Many experts believe it is in an attempt to influence the U.S. presidential election and, on the surface, it appears as though the leaks are meant to harm the woman and her husband who facilitated the takeover of 20 percent of U.S. uranium reserves.

As reported by Defense One, there is little chance anyone could imagine that what has been leaked thus far in an operation believed to be engineered by Russian intelligence is anything but harmful to the DNC:

On Friday, Wikileaks published 20,000 emails stolen from the Democratic National Committee. They reveal, among other things, thuggish infighting, a push by a top DNC official to use Bernie Sanders’ religious convictions against him in the South, and attempts to strong-arm media outlets. In other words, they reveal the Washington campaign monster for what it is.

Leaving aside the political nature of the hack, there is considerable evidence to suggest that the dump of emails to Wikileaks was an act orchestrated by the Kremlin, working through proxies, to undermine Clinton. Someone in Moscow doesn’t want her to be president.

“This has all the hallmarks of tradecraft. The only rationale to release such data from the Russian bulletproof host was to empower one candidate against another. The Cold War is alive and well,” Tom Kellermann, the CEO of Strategic Cyber Ventures told Defense One.

In June, cybersecurity company CrowdStrike, which was under contract with the DNC, said in a blog post that a pair of Russian intelligence groups gained access to the party’s networks. “One group, FANCY BEAR or APT 28, gained access in April. The other, COZY BEAR, (also called Cozy Duke and APT 29) first breached the network in the summer of 2015,” Defense One reported.

Cybersecurity company FireEye first discovered APT 29 in 2014, quickly noting that the group had ties to the Russian government.

“We suspect the Russian government sponsors the group because of the organizations it targets and the data it steals. Additionally, APT 29 appeared to cease operations on Russian holidays, and their work hours seem to align with the UTC +3 time zone, which contains cities such as Moscow and St. Petersburg,” the firm wrote in a report on the group.

This is the same group that hacked the State Department, the White House, and the civilian email of the Joint Chiefs of Staff.

“We’ve had lots of experience with both of these actors attempting to target our customers in the past and know them well. In fact, our team considers them some of the best adversaries out of all the numerous nation-state, criminal and hacktivist/terrorist groups we encounter on a daily basis,” noted CrowdStrike’s CTO Dmitri Alperovitch. “Their tradecraft is superb, operational security second to none and the extensive usage of ‘living-off-the-land’ techniques enables them to easily bypass many security solutions they encounter.”

But for U.S. intelligence – and voters, for that matter – the real question becomes: Why Clinton and not Trump?

It could be that Putin believes Trump would be a better – or easier – president to control and manipulate, which would feed into criticisms that he’s buffoonish and not ready for foreign policy prime-time.

But on the other hand, if Putin has the goods on Clinton – and her husband – wouldn’t having her in office be to his advantage? Being in possession of material he could use to blackmail her would give him a tremendous advantage in any negotiations and dealings. One of the principle areas U.S. intelligence analysts and officials concentrate on when it comes to issuing and re-issuing security clearances is the subject’s financial status; chronically late payments, being behind on a car or a house, etc., are red flags because historically, most U.S. spies are turned by money. The uranium deal Clinton helped facilitate, and the millions of dollars that flowed into the Clinton Family Foundation as a result of that deal alone give a nemesis plenty of leverage.

It’s obvious that, for some reason, Putin believes he will be better off dealing with a President Trump, who is currently assembling a top-notch, experienced foreign policy team. Time will tell.