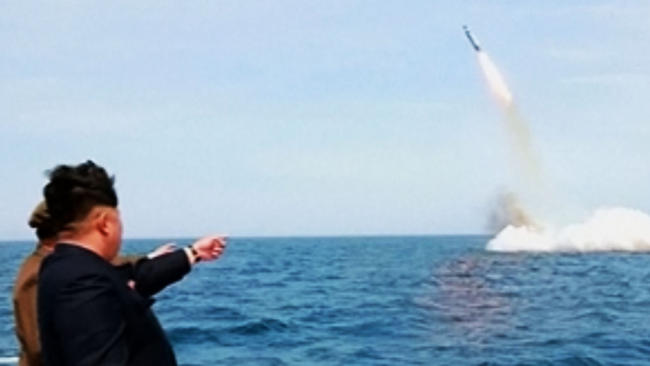 (NationalSecurity.news) North Korea launched another ballistic missile from one of its submarines this week that flew about 310 miles, marking the longest distance thus far for such a weapon, Seoul officials said, which puts all of South Korea and perhaps parts of Japan within range.

As reported by The Associated Press, Pyongyang already possesses a variety of land-based ballistic missiles capable of reaching all of South Korea and Japan, including U.S. military installations in both countries. However, the North’s development of sub-launched ballistic missiles that are reliable would give it the capability of deploying systems that are harder to detect and destroy before launch.

Seoul’s military condemned the launch, as did Japan and even China. South Korean officials called it an “armed protest” against regularly scheduled annual drills with the United States, but they also acknowledged that the missile test was a marked improvement over earlier ones.

The missile was fired by a submarine off North Korea’s eastern coast, near the town of Sinpo. It flew into Japan’s air defense identification zone, officials in South Korea said. U.S. Strategic Command told the AP that it had tracked the launch of what was presumed to be a KN-11 missile, which landed in the Sea of Japan.

Officials said if fired close enough to shore the missile could hit virtually any part of South Korea. But it could also strike portions of Japan and the U.S. military installations on the island of Okinawa, given the operational range of North Korea’s Sinpo-class subs, which are capable of sailing about 620 miles underwater at a time.

Pyongyang launched two missiles from subs earlier this year, but defense officials in South Korea said they likely blew up in midair after flying less than 18 miles.

The latest launch comes amid a series of missile, rocket and other weapons tests this year by the North, which is rushing to develop and deploy reliable weapons that can strike targets as far away as the United States.

Following a string of failed tests, in June the North launched a mid-range missile that flew more than 870 miles high. Defense experts and analysts said at the time that it demonstrated North Korea’s progress in its effort to target and strike U.S. forces throughout the region.