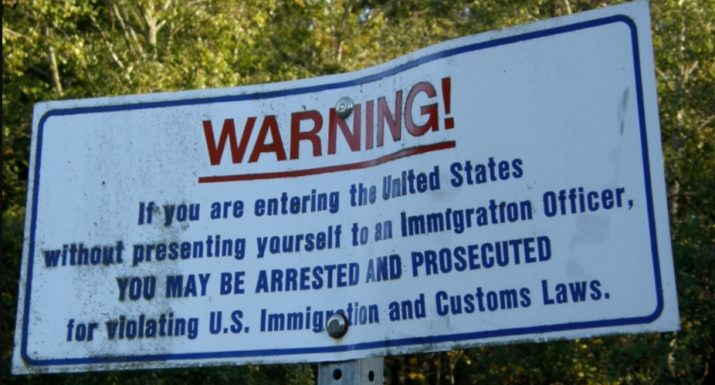 Very early in Donald J. Trump’s campaign, the billionaire business mogul and real estate developer made immigration enforcement a primary issue, starting with building a wall along the length of the U.S.-Mexico border and following up with enforcing existing immigration laws.

Thanks mostly to a timid GOP-led Congress, which has thus far refused to fund the project, the president has been unable to make good on his promise to build the wall. But his administration’s commitment to enforcing immigration laws currently on the books has had a similar effect: It has already led to far fewer numbers of illegal border crossings.

That’s in large part due to the fact that potential illegal aliens are deciding to stay home instead, choosing not to risk thousands of dollars paid to a smuggler only to be caught and sent back across the border.

Or worse, if recently-passed legislation in the House becomes law. One of two bills passed last week requires jail time for repeat offenders who cross illegally into the U.S. more than once; the other legislation would strip federal funding from so-called “sanctuary cities,” local jurisdictions that have adopted policies forbidding police and others to cooperate with federal immigration authorities in identifying and helping deport those in the country illegally.

After both bills passed, Trump urged the Senate to act to “save American lives.”

“Opposing these bills, and allowing dangerous criminals back into our communities, our schools and the neighborhoods where our children play, puts all of us at risk,” Trump said.

As for those who are choosing to remain at home instead of risk getting caught coming to the U.S. illegally, The New York Times noted:

From February through May, the number of undocumented immigrants stopped or caught along the southwest border of the United States fell 60 percent from the same period last year, according to United States Customs and Border Protection — evidence that far fewer migrants are heading north, officials on both sides of the border say.

Meanwhile, the Trump administration has begun much broader enforcement of existing immigration law than the preceding Obama administration. Trump has reversed Obama’s rules putting a priority on arresting the most serious of illegal alien criminals, focusing on them as well but also casting a broader net, arresting adults who have been living illegally in the U.S. whose only crime was sneaking into the country illegally (which, of course, is still a crime). (RELATED: Trump administration effort to step up immigration enforcement is keeping illegals at HOME)

As for the recently-passed legislation, the measure imposing stricter punishment on repeat border jumpers is nicknamed “Kate’s Law” — “after 32-year old Kathryn Steinle, who was shot and killed in San Francisco in 2015 by a man who was in the country illegally,” ABC News reported. “Juan Francisco Lopez-Sanchez, who pleaded not guilty to the crime, had been released by sheriff’s officials months earlier despite a request by immigration officials to keep him behind bars.”

John Kelly, head of Dept. of Homeland Security Secretary, told reporters that he was appreciative of Congress’ effort to “address the dangers of sanctuary cities and illegal immigrant offenders.”

During a news conference with House Speaker Paul Ryan, Kelly said DHS “will enforce the laws that are passed by Congress,”

But he added: “I am offended when members of this institution put pressure and often threaten me and my officers to ignore the laws they make.”

That would largely be Democrats.