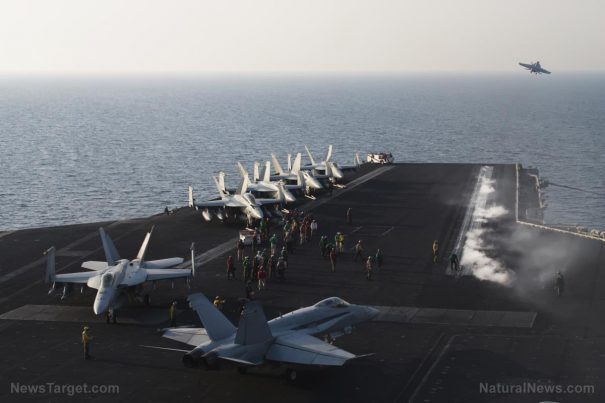 The U.S. Navy says they have now perfected railgun technology they began more than a decade ago. The weapon, which uses electromagnetic energy, propels missiles at accelerations of Mach 6 (4,500 mph). This is six times the speed of sound. Hailed by military officials as the “future of warfare,” the railgun ushers in a new wave of military weaponry.

The device, which experts called the “Star Wars” railgun, uses strong magnetic fields which generate a “pulse power system.” This field forces missiles out of the tube at extraordinary rates, with the capability to penetrate concrete 100 miles away. Because the technology using kinetic and laser energy rather than traditional explosives, missiles travel more efficiently. There is also an improved potential for the weapon to be used at longer ranges. Official press releases by the Navy call the technology “a true warfighter game changer.”

“Wide-area coverage, exceptionally quick response and very deep magazines will extend the reach and lethality of ships armed with this technology,” spokespeople of the Navy told the Daily Mail.

The weapon is currently being tested at the Naval Warfare Center Dahlgren Division in Virginia. Despite the brilliance of the design, engineers say that they are still working on improving the firing rate of the Star Wars gun. The aim is to have the weapon issue out 10 shots per minute. This is a shot every six seconds. The railgun is also expected to be capable at firing at a power of 32 megajoules, with a range of 110 nautical miles within the next year. The head of Naval Air Warfare and Weapons, Dr. Tom Beutner told the International Business Times that “we expect that both…milestones will be achieved over the next year.”

Another aspect that war engineers are looking into is the gun’s durability. While current materials seem to be holding up to the power, concerns have been raised over long-term use. This is considering how much energy the gun produces with each ejection.

“They’ve extended the launcher core life from tens of shots’ core life when the program started to something that’s now been fired over 400 times…we anticipate barrels will be able to do over 1,000 shots,” Dr. Beutner explained. (Related: U.S. Navy unveils railgun that can launch low-cost projectiles at Mach 7 with range of 100 miles.)

Once the U.S. Navy deems the Star Wars gun to be ready for combat, they will be installed on three DDG-100 Zumwalt-class destroyers.

The path to a frightening and awesome technology

The railgun has been in development since 2005. The goal of Phase I was to design a futuristic weapon system that could launch projectiles at more than a hundred nautical miles. The launcher technology needed to have an adequate service life with allowable risk factors on the pulsed power system.

This led to Phase II, which began in 2012 which concentrated on making the weapon able to fire repetitively without failure. Engineers worked on thermal management techniques to ensure that the system did not overheat. The railgun had to sustain rapid and powerful launches.

The Navy is looking into other research opportunities that have arisen due to the creation of this device. This includes developing other tactical weapons. War engineers are also considering studying aerothermal technology to build systems that could protect flight vehicles as well as developing high-acceleration tolerant components for battleships.