North Korea’s latest nuclear test caused earthquakes and landslides; dictator’s quest for power seems sure to threaten the world one way or another 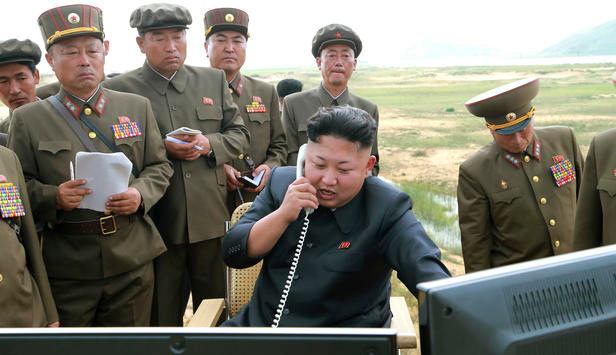 The recent nuke test by North Korean dictator Kim Jong-un resulted in earthquakes and landslides in his own country, satellite imagery reportedly suggests.

From the Daily Mail:

The landslides were triggered in the detonation area at the military base of Punggye-ri and beyond, with green mountains reduced to muddy hillsides.

North Korea’s latest test caused two earthquakes amid speculation the rock over the site had caved in, initially sparking fears radioactive material had leaked into the atmosphere.

The test at the 85-acre site– North Korea’s sixth — caused a 6.3 magnitude earthquake followed in quick succession by one that clocked in at 4.1.

Experts say that the hydrogen bomb test on September 3 was the most powerful one from the rogue nation to date at 250 kilotons, more than 15 times more powerful than the bomb that was dropped on Hiroshima at the end of World War Two. The H-bomb is apparently capable of being deployed on a long-range missile with the wherewithal to reach our shores.

“In a televised statement, North Korea described the underground explosion, which triggered a large earthquake, as a ‘perfect success in the test of a hydrogen bomb for an ICBM,'” US Defense Watch explained.

The United Nations and the U.S. have imposed tough economic sanctions on North Korea as it continues to make threats against the world.

President Trump has insisted that all options are on the table insofar as dealing with the North Korean nuke threat, although any military intervention would likely result in death and destruction for our allies in South Korea as well as grave harm to the population of neighboring countries.

The North Korean propaganda agency has declared that its nukes could sink Japan into the sea and “reduce the U.S. mainland into ashes and darkness,” the New York Daily News reported. France’s defense minister has separately warned that Kim Jong-un is developing missiles that could reach Europe “sooner than expected.”

The American people have no appetite for more foreign wars, and many Trump supporters were disappointed, for example, that the president allowed the globalists in the White House to convince him to send more troops to Afghanistan. (Related: Read more about North Korea at Nuclear.news.)

In the video below, Natural News founder Mike Adams says that North Korea already has a stockpile of perhaps up to 60 nuclear warheads that could pose a dire threat to U.S. national security, however, and that these unique circumstances may require a first strike by the Trump administration for moral, ethical, and tactical reasons.

What additional steps, if any, do you think that the U.S. should take in response to the nuclear threat from North Korea?