To infinity and beyond — Pence says the U.S. is returning to the moon 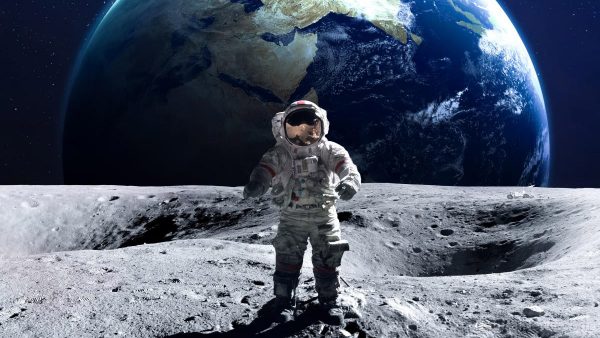 The lilt in Vice President Mike Pence’s voice fluctuated as he described the current situation of our space program. “Rather than lead in space, too often, we’ve chosen to drift. And, we learned 60 years ago, when we drift, we fall behind.” Pence addressed dozens of representatives of the space industry at the newly re-established First National Space Council on October 5 at the Steven F. Udvar-Hazy Center in Chantilly, Virginia. The program had been placed on the back burner for several years during the Obama administration; a move, Vice President Pence implied, that caused us to lose our place as one of the leading counties in space exploration.

But no longer. During a brief, but poignant, speech, Vice President Pence vowed that the U.S. will return to the moon. Pence said that the focus of the Trump administration would be on refocusing the American space program towards moon exploration. This new announcement by Pence aligns with the visions of former President George W Bush.

There has been no human space mission to the moon since the final Apollo mission in 1972. Pence lamented that our lack of space interest has forced us to pay Russia a whopping $76 million per U.S. astronaut they ferry to the International Space Station. And while American companies such as SpaceX and Boeing are currently developing a capsule-type “taxi” service for NASA astronauts, the technology has yet to be tested.

Pence said that the Trump administration, along with the reinstated National Space Council, will develop a long-term U.S. space strategy that will put us once again in the forefront of space technology and exploration.

These are bold words, especially considering that the projected time frame of sending another man to the moon is within the next five years.

Beyond the technology that powers it, Pence said that there is a tactical reason behind the move. He says that improving our space technology would impact national security.

“Our adversaries are aggressively developing jamming and hacking capabilities that could cripple critical military surveillance, navigation systems and communication networks,” Pence said. “In the face of this threat, American must be as dominant in the heavens as it is on Earth.” (Related: European governments launch project to confirm presence of alien life.)

Look to the stars; that is where our next battle begins

Despite critics arguing against President Trump’s nomination of Jim Bridenstine as NASA’s next administrator, you cannot argue that more supreme powers are focusing on space technology. Both Russia and China are developing core rocket and exploration designs to improve their political influence. The Oklahoma Republican will be the first-elected politician to serve as the NASA administrator. Mr. Bridenstine has always warned of space being the next frontier in political warfare. He was the main author of the “American Space Renaissance Act” which was submitted last year but was never passed into law. In the proposed legislation, Mr. Bridenstine wrote that government spending in space should be primarily about improving national security.

There have been 12 Apollo missions since 1967, with the last one (Apollo 17) being launched in 1972. The most famous Apollo mission was the Apollo 11. This was the first flight that performed a crewed lunar landing and could return to Earth. It is this mission where Neil Armstrong uttered his famous words, “one small step for a man, one giant leap for mankind.”