U.S. Army to preposition war material, gear in Asia and Europe to in preparation for rising threats 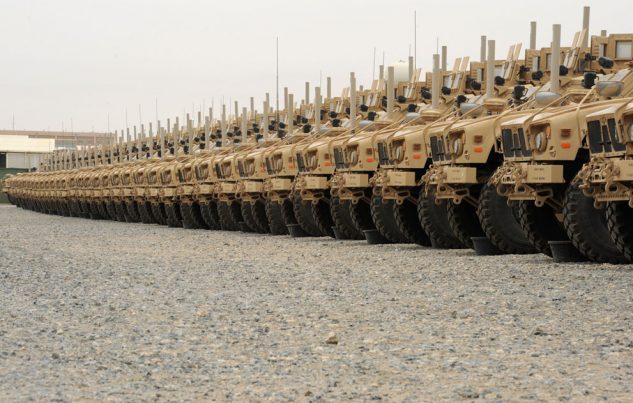 (NationalSecurity.news) The U.S. Army plans to pre-position tons of war stocks and gear in Europe, Vietnam, and other as-yet-unnamed countries to allow for quicker deployment in a time of crisis, some of it in regions where China has long considered its domain, Breaking Defense reports.

Gen. Dennis Via, head of the U.S. Army Materiel Command, emphasized that the bulk of the equipment will be for Humanitarian and Disaster Relief [HADR] operations, not the heavy armor and other warfighting vehicles that are growing rapidly once again in Europe. Nevertheless, the presence of a U.S. Army cache in Vietnam is dramatic, due to the history of conflict between the Vietnamese and the United States. That said, Vietnam has also fought a land war with neighboring China and has had multiple naval clashes, so the prepositioning of stocks and gear there is not likely to make Beijing happy.

As Breaking Defense reported further, during the Cold War the U.S. engaged in a containment strategy with the USSR and China – that is, an encirclement, from their point of view, with large forward-deployed forces stationed at permanent bases in the countries of allies around the world. Today, however, such permanent U.S. presence is difficult, politically, for Washington as well as the governments of other nations who must deal with opposition from their own people to permanent U.S. bases. As such, U.S. deployments overseas are now temporary.

However, if the need arises, temporary tours of duty can turn in to a de facto permanent U.S. presence, simply by rotating American military units in to replace departing units, the current practice involving brigade combat teams in Europe South Korea.

As Breaking Defense further noted, the Army has two categories of prepositioned equipment – each of which has a different diplomatic implication.

“Army prepositioned stocks are go-to-war equipment,” Via said, with five sets on land around the world and two mobile on ships. However, he told reporters at the Association of the U.S. Army winter conference in Huntsville, Ala., what is being planned for Asia, as well as potentially for Africa and South America, are “activity sets” that are more tailored for lower-intensity missions like multinational training exercises and relief operations.

“Throughout the Pacific Rim, these will be humanitarian assistance/disaster relief-type equipment and material, so that when you have typhoons and other types of natural disaster” — such as the 2004 tsunami — “US Army Pacific Command can respond more quickly,” Via said. “We are looking, for example, at in Cambodia placing a combat support hospital.”

In contrast, the Army is moving tons of heavy weaponry and gear into Europe, including as many as 200 M1 Abrams tanks and hundreds of armored fighting vehicles.

In fact, the Pentagon has been quietly restocking European garrisons that it once held during the Cold War.

The most recent evidence that the Pentagon considers the likelihood of war in Europe much higher than, say, in the years following the end of the Cold War with [the then-USSR-allied] Russia, is the deployment of U.S. Marine Abrams tanks and heavy artillery in secret caves in Norway.

“Any gear that is forward-deployed both reduces cost and speeds up our ability to support operations in crisis, so we’re able to fall in on gear that is ready-to-go and respond to whatever that crisis may be,” Col. William Bentley, operations officer for the 2nd Marine Expeditionary Brigade, said in a statement last week.