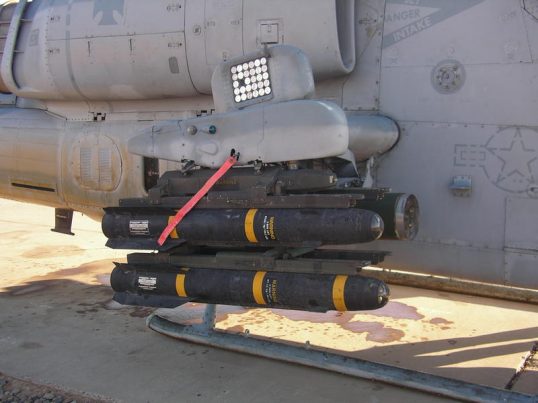 (NationalSecurity.news) As the United States entered into its 15th year of war, the Pentagon is finding it increasingly difficult to keep war stocks at acceptable levels – especially the smart bombs and missiles being used in the ongoing air campaign against the Islamic State.

In addition, as reported by Defense One, defense contractor Lockheed Martin is expanding its munitions factories to meet the rising demand from the U.S. and its allies fighting ISIS, as well as begin equipping American fighter planes to battle great powers at sea.

“We are seeing a lot of international demand for our product set,” Frank St. John, Lockheed’s vice president of tactical missiles, told the defense news site. “That’s causing us to do a lot of work in international partnerships and co-production and we’re very excited about those opportunities.”

The U.S. and its allies are especially burning through stockpiles of Lockheed’s Hellfire missile, the weapon of choice for Predator and Reaper drones. In addition, combat helicopters and fighter planes also carry the laser-guided weapon.

“It requires a little bit of investment on our part to expand the factories, but the demand is there and we’re keeping up with it [and] we’re staying ahead of it,” St. John added.

But that also means American taxpayers are kicking in as well. In June, the U.S. Army paid Lockheed $18 million to increase production of Hellfire missiles, from 500 to 650 a month. St. John said the weapons maker has added additional equipment – tools, test gear and floor space – to its Hellfire production line.

At its Archbald, Pa., factory, Lockheed has “quadrupled” its production capacity, St. John said, to meet demand from the U.S. and its allies for the Paveway II laser-guided bomb.

Top military officials predict that the campaign against ISIS will last for years, so demand for missiles and bombs will also remain high, Defense One noted.

“I don’t see events in the world changing dramatically over the next couple of years,” St. John told the site. “[T]he conflicts that are requiring the use of our systems are lingering, so anticipate that we’ll be producing at a pretty high level for some period of time.”

At the same time Lockheed is gearing up to build a new generation of weapons that may be used to fight future wars. The contractor has expanded its Troy, Alabama, factory, where it builds the Joint Air-to-Surface Standoff Missile, by 60,000 square feet. The expansion will also make room for the company to manufacture 110 Long-Range Anti-Ship Missiles that are now being developed for U.S. Navy Super Hornet fighters and Air Force B-1B bombers.