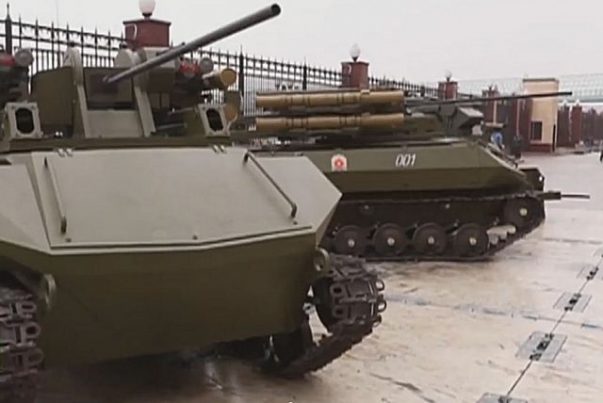 (NationalSecurity.news) The Pentagon’s No. 2 civilian official said earlier this week that the Defense Department is becoming increasingly concerned that adversarial nations are developing autonomous killer robotic systems, noting that while the U.S. won’t give such systems the ability to kill on their own, others might.

Robert O. Work, the deputy defense secretary, said the Pentagon has yet to “fully” figure out the issue of self-acting machines but is continuing to look into the technology. The U.S. military, meanwhile, has built a modern force that relies heavily on troops’ decision-making, though “authoritarian regimes” may find the development of autonomic weapons more attractive because it allows for the consolidation of action among just a few leaders of the regime.

“We will not delegate lethal authority to a machine to make a decision,” Work said, as reported by The Washington Post. “The only time we will… delegate a machine authority is in things that go faster than human reaction time, like cyber or electronic warfare.”

Work’s comments came during the first in a series of live events sponsored by the Post called “Securing Tomorrow,” hosted by columnist David Ignatius. Work said the U.S. is likely to experiment somewhat with artificial intelligence in the next five to 10 years, pointing specifically to self-parking vehicles.

The event focused heavily on how the Pentagon is preparing for the future through what it calls a Third Offset Strategy, in which the military is seeking to counter the military advances of adversaries. The concept gets its name from two earlier “offsets.” In the first, the Pentagon developed tactical nuclear weapons during the Cold War. In the second, the military introduced the use of GPS to precisely guide a variety of bombs and missiles on the battlefield.

The Third Offset will focus on the introduction of AI – machine learning, consisting of a network of machines that operate together, as well as the distribution of military force via drone swarms and other similar technology. Work noted that means the Defense Department would not try to match adversaries “tank-for-tank, gun-for-gun, missile-for-missile, person-for-person.” Instead, the Pentagon plans to focus on offsetting enemy strength in other ways.

“This is a much more dynamic strategy than we had in the Cold War,” Work said, according to the Post. “Then we had one, single opponent. It was a very stable competition, and we kind of understood the way they were going. We knew the areas where we could pick where we would dominate the competition, like in information technologies and precision-guided munitions.

“This is much more dynamic environment in which a lot of military-relevant technologies are coming from the commercial sector,” he added.

When asked if U.S. troops needed to prepare for the eventuality of robotic warfare, Work said the U.S. has to begin working its “strategic muscles” more than in the past quarter-century because of the emergence of China as a threat and the re-emergency of Russia as an adversary.

Part of that process will include the disclosure of new military capabilities that are designed to make enemies think carefully before acting, said Work. One recent example is the emergency of the Pentagon’s Strategic Capabilities Office, which had previously worked primarily in the shadows since being established in 2012.

“We will reveal for deterrence, and we will conceal for war-fighting advantage,” Work said. “There are a lot of things in the budget that we don’t talk about because we want to preserve that in case, God forbid, deterrence fails and we do come to a conflict of arms.”