ISIS has zoned in on scores of U.S. airbases around the world and is calling for supporters to attack them 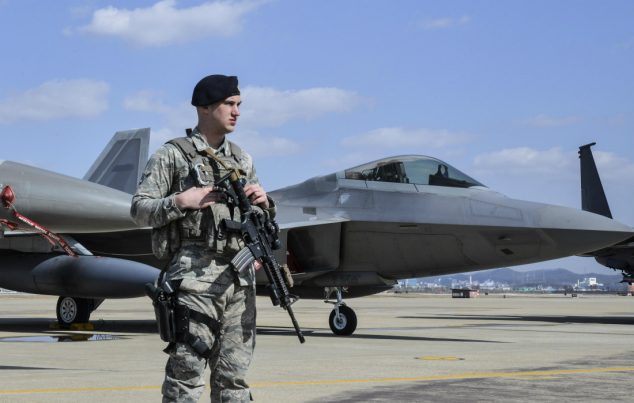 (NationalSecurity.news) In the age of global terrorism no part of the world is safe and that apparently includes U.S. Air Force bases, according to South Korea’s intelligence service.

As reported by CNN, the Islamic State of Iraq and Syria has gathered information on 77 U.S. and NATO air facilities around the world and is now actively calling on supporters to launch attacks against the facilities, Seoul’s National Intelligence Service (NIS) said in a statement on Sunday.

The terrorist organization also released information on individuals in 21 countries, and that included the personal information of one employee of a South Korean welfare agency. That person is now under protection, the agency said.

In a Monday statement, U.S. Forces Korea (USFK) officials said they were taking the security of their facilities seriously, as always, and were responding to the perceived threat.

“Through constant vigilance and regular exercises with our South Korean counterparts, we remain prepared to respond at any time to any emerging threats,” the statement said.

“USFK remains committed to ensuring the highest degree of security on the Korean Peninsula.”

Over the past five years, 50 people suspected of being part of terrorist organizations have been deported from South Korea, according to NIS.

In the U.S., terrorist attacks inspired by Islamic extremists have occurred at Fort Hood, a recruiting depot in Chattanooga, Tenn., and other locations. In a separate report, CNN noted that military facilities and personnel are a common target of jihadist plots within the U.S.

Citing data collected by New America, a security think tank, nearly one-third of the 119 Americans accused of plotting domestic attacks since 9/11 were alleged to have targeted U.S. military facilities and personnel.