Iran won’t get the message the U.S. isn’t to be messed with until President Trump sends it 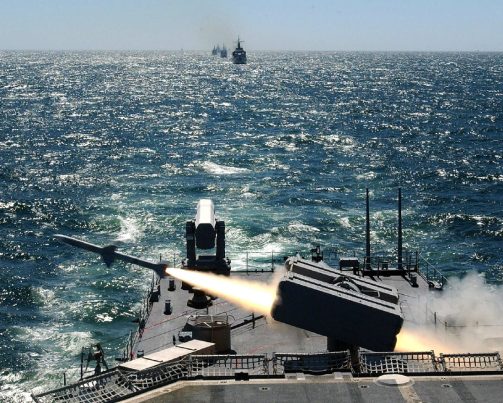 (NationalSecurity.news) The mullahs running Iran continue to tweak President Obama in the eye, becoming increasingly provocative and aggressive in their neck of the woods because they know they can get away with it. The president who guaranteed them nuclear weapons in a couple years – then paid them for the development – goes out of his way to allow this puny, regional power free reign when it comes to insulting, threatening and endangering U.S. naval personnel.

It happened again just this past week, when personnel aboard an Iranian patrol boat pointed their weapons at a U.S. Navy helicopter. As Reuters reported:

A small Iranian Islamic Revolutionary Guard vessel pointed its weapon at a U.S. military helicopter in the Strait of Hormuz on Saturday, two U.S. defense officials told Reuters on Monday, an action they described as “unsafe and unprofessional.”

The incident is the latest in a series of similar actions by Iranian vessels this year, but the first reported since Republican Donald Trump won the U.S. presidential election on Nov. 8.

The officials, speaking on condition of anonymity, said the incident took place when a Navy MH-60 helicopter flew within half a mile (0.8 km) of two Iranian vessels in international waters. One of the vessels pointed a weapon at the helicopter, the U.S. officials said.

“The behavior by our standards is provocative and could be seen as an escalation,” the officials said. At no point did the crew of the helicopter feel threatened, they added.

It was not immediately clear what type of weapon was pointed at the U.S. aircraft.

This, of course, isn’t the first time something like this has happened. In September, a U.S. Navy coastal patrol ship changed course after an Iranian fast-attack craft came within 100 yards (91 meters) of it.

The Iranians clearly need to be taught the kind of less about American resolve and power that President Reagan taught them in the late 1980s, near the end of his second term. When Iranian forces took over oil platforms and militarized them in the Persian Gulf following an incident in which a U.S. warship struck an Iranian mine, Reagan ordered the platforms destroyed and, for good measure, he ordered the same for a half-dozen Iranian naval vessels.

”We’ve taken this action to make certain the Iranians have no illusions about the cost of irresponsible behavior,” Reagan said. ”We aim to deter Iranian aggression, not provoke it.

”They must know that we will protect our ships, and if they threaten us, they’ll pay a price,” he added.

Apparently, it’s time for another lesson – one that should have been forthcoming the moment Iran released several U.S. sailors its forces illegally captured earlier this year. It’s obvious Obama has no desire to teach current Iranian leaders what Reagan taught that generation of leaders 30 years ago.

President Trump will have to provide it, and he surely will. During the campaign Trump pledged to retaliate against Iranian aggression.

“When they circle our beautiful destroyers with their little boats and they make gestures at our people that they shouldn’t be allowed to make, they will be shot out of the water,” he said on the campaign trail.

Mullahs be warned: You’re going to be in the crosshairs of a president who won’t brook this nonsense come Jan. 20.