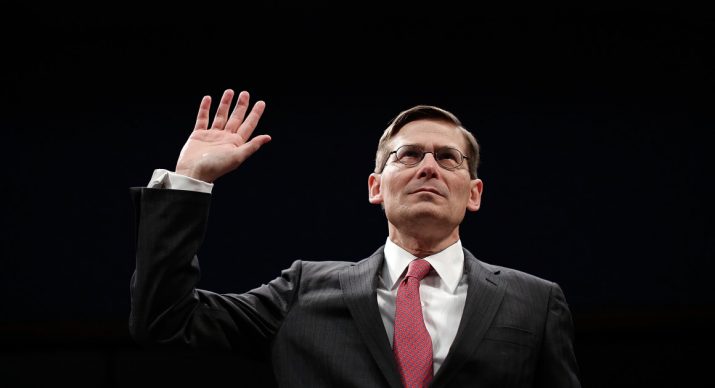 In fact, the officials testified, ISIS has metastasized throughout portions of Iraq and Syria that it controls, and that greater political and military efforts are necessary to defeat it.

Former Acting CIA Director Michael Morell warned the House panel that ISIS’ influence has also extended into the United States, where the FBI says it has launched more than 900 investigations into homegrown extremism, all of which are open and ongoing. In addition, he said, the radical organization has also expanded its influence to other countries in the Middle East including Afghanistan, where it is opposed by the Taliban, and Libya.

“I would not be surprised if we woke up one morning and ISIS had grabbed a large part of Libyan territory, the same kind of blitzkrieg, on a smaller scale that we saw in Iraq,” Morrell told the HASC.

Though U.S.-backed forces have scored some military victories against ISIS in recent weeks, such as the Iraqi army’s recapture of Ramadi, Morell – along with Michael Vickers, former under secretary of defense for intelligence, and former U.S. Ambassador to Syria Robert Ford – warned nevertheless that ISIS was more dangerous than before due to its transformation into a quasi-state and political movement.

“There are people inside the Obama administration who are saying they’re not doing enough,” Thornberry said.

Last month the Senate Armed Services Committee, which is chaired by Sen. John McCain, R-Ariz., held a hearing where Defense Secretary Ashton Carter and Joint Chiefs of Staff Vice Chairman Air Force Gen. Paul Selva said U.S.-led forces were making steady progress against ISIS and were degrading its capabilities. Others, however, do not share that optimistic view.

Morrell said that the group’s physical territory provides and effective propaganda tool as well as a base of operations where it can plan and carry out attacks against the West, such as those conducted in Paris last year and in San Bernardino, Calif., in December. He went onto note that those attacks support his contention that ISIS “poses a significant and lethal threat to the United States of America.”

In his final State of the Union Address Jan. 12, Obama downplayed the ISIS threat.

“Over-the-top claims that this is World War III just play into their hands,” Obama said, in an apparent attempt to mock his detractors. He further argued that ISIS fighters “do not threaten our national existence.”

There is more to it than that, argue his critics. As the right-leaning Heritage Foundation noted in a post at The Daily Signal following his speech, “in the past two years ISIS has established a presence in 19 countries. Foreign fighters are flocking to the wannabe caliphate in droves.”

“Obama’s remarks tonight reaffirmed what everyone already knew: that there is no strategy to defeat ISIS and he cannot wait to pass the buck to his successor,” Heritage noted.

Ford seemed to grasp that, noting that within the territory ISIS controls – which is a landmass roughly equal to the size of Maryland – it is “more than the sum of fighters,” because “it builds support, it recruits, it replaces fighters who are killed.

“It even trains little children,” he added.

Because of that, the U.S. should focus on reconciliation between sectarian groups within Iraq and their joint interests, to develop a political alternative as well as keeping open military options.

All three former top officials agreed that Syrian President Bashar al Assad would have to go, but that view is not universally shared within U.S. intelligence and defense communities.

In terms of military force, Vickers said that the current air campaign against ISIS fighters should be intensified on a scale of the U.S. air campaign in Afghanistan in 2001, to deny them sanctuaries. He said the current Obama administration effort is “a fraction of what it should be.”

President Obama will likely here this for the remainder of his year in office, but it’s not likely he’ll do much to respond, given his penchant for focusing more on domestic issues.