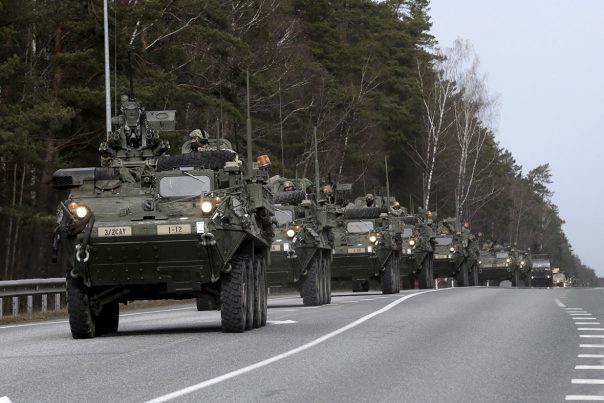 (NationalSecurity.news) The Pentagon plans to deploy a brigade’s worth of U.S. Army troops, along with hundreds of tanks, armored vehicles and artillery full-time along NATO’s eastern border beginning in February, as a deterrent to Russian aggression.

The Wall Street Journal reported last week that the deployment will include some 250 Abrams main battle tanks, “Bradley Fighting Vehicles and Paladin self-propelled howitzers as well as more than 1,700 additional wheeled vehicles and trucks.”

The deployment of U.S. troops and armor along NATO’s Russian perimeter will be the first of its kind since the end of the Cold War, the paper noted.

The Pentagon noted that the plans represent an escalation of a proposal put forth last year, saying military, diplomatic and administration officials were examining ways to bolster U.S. presence in Eastern Europe, including prepositioning older materiel in the region.

The WSJ noted that Deputy Defense Secretary Robert Work said the new deployment plan ought to put such concerns to rest since it stations more of the Army’s best and up-to-date equipment in the area, will rotating brigades at a time.

In addition to equipment that has already been pre-located to Europe, “there will be a division’s worth of stuff to fight if something happens,” Work told the paper. “If push came to shove, they’d be able to come together as a cohesive unit that has trained together, with all their organic equipment, and fight. That’s a lot better than what we have right now.”

The White House has signed off on the broad plan, which is set to begin in February 2017, the month after President Obama leaves office, as part of the $3.4 billion European Reassurance Initiative budget last month. The plan leaves the specifics to the Defense Department; Congress still has to approve the request.

Increasing military spending to counter Russia has bipartisan support, the WSJ noted, but overall the budget has proven to be a controversial and contentious issue in this election year. The money earmarked for the deployment quadruples the amount the U.S. was previously spending for European defense projects including exercises and troop deployments.

The commander of U.S. Army Europe, Lt. Gen. Ben Hodges, said the plan creates a constant U.S. presence along NATO’s eastern flank. He added that forces in each of the eastern NATO member countries would come together from time to time for military exercises and to train as a larger force.

“There will be American equipment and people in each of these countries,” he said. “We will have the flexibility to converge the entire brigade for exercises and that is an important part of the deterrence, to show a warfighting capability.”

Russian officials said they would be examining the U.S. plan carefully as well as overall decisions by NATO to bolster its presence in the East. One Russian official did say, however, that the U.S. and its allies were using false pretexts to justify a military buildup opposite Russia.

“Russia is not moving,” Alexander Grushko, the Russian ambassador to NATO, told the WSJ last month. “This is NATO that is moving its territory, as a result of enlargement, closer to Russia. And now it is using this territory to project military power in the direction of Russia.”

Newer members of NATO in the east, however, see the U.S. move as reassuring, insisting that they are the ones that are most vulnerable.

As for the older U.S. equipment, it will be sent to a U.S. depot in Germany for refurbishing, then redistributed throughout Germany, the Netherlands and Belgium, the paper said.