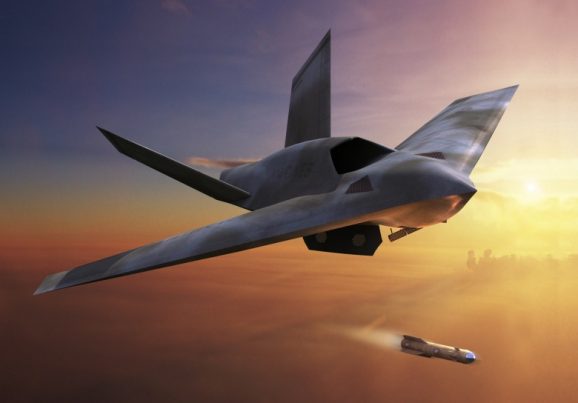 (NationalSecurity.news) Russia is building and deploying the largest nuclear ICBM in the history of the planet. China, meanwhile, is upgrading its nuclear arsenal as well. Both nations are improving their missile defense capabilities.

It would seem that in any conflict, then, either China or Russia – or both – checkmate any U.S. offensive nuclear capacities, at least at some point in the near future, right?

Hold on to that thought.

As reported by The National Interest, America is developing a response to these rising competitor-nation capabilities: The drone swarm.

Currently, Air Force researchers and scientists are making progress in developing swarms of miniature drones that are engineered with algorithms that enable them to coordinate with each other to avoid collisions. Senior Air Force officials say the precise roles and missions for this type of technology have not yet been worked out but experts and analysts have discussed potential applications of the technology.

As The National Interest reported further:

Swarms of drones could cue one another and be able to blanket an area with sensors even if one or two get shot down. The technology could be designed for high threat areas building in strategic redundancy, Air Force Chief Scientist Gregory Zacharias told Scout Warrior in an interview.

Groups of coordinated small drones could also be used to confuse enemy radar systems and overwhelm advanced enemy air defenses by providing so many targets that they cannot be dealt with all at once, he said.

He further explained that, perhaps, one of the drones could be programmed to be the leader of the swarm, while others function as ISR (intelligence, surveillance, reconnaissance) platforms, munitions or communications devices. Zacharias also noted there was a great strategic and tactical advantage to be had operating drone swarms, which could also be dispersed on command.

“Do you want them to fly in formation for a while and then disaggregate to get through the radar and then reaggregate and go to a target? They can jam an enemy radar or not even be seen by them because they are too small. The idea is to dissagregate so as not to be large expensive targets. In this way if you lose one you still may have 100 more,” he said.

Per the vision of Defense Secretary Ashton Carter, the Air Force will also continue to look at combining manned-unmanned platforms, such as drones and the new F-35, depending on the mission.

“Another project uses swarming autonomous vehicles in all sorts of ways and in multiple domains.  In the air, they develop micro-drones that are really fast, really resistant.  They can fly through heavy winds and be kicked out the back of a fighter jet moving at Mach 0.9, like they did during an operational exercise in Alaska last year, or they can be thrown into the air by a soldier in the middle of the Iraqi desert,” Carter said recently. “And for the water, they’ve developed self-driving boats which can network together to do all kinds of missions, from fleet defense to close-in surveillance, without putting sailors at risk.  Each one of these leverages the wider world of technology.”