The Pentagon is preparing for a tank war with Russia 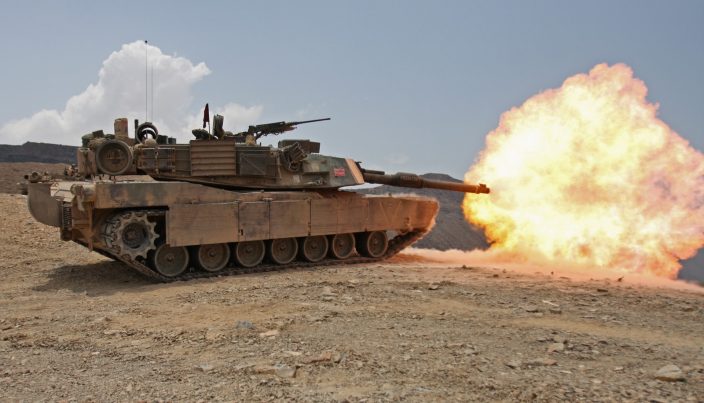 (NationalSecurity.news) Earlier this century there was no shortage of ground combat experts who believed that the age of the tank may be coming to an end. Lethal battlefield missiles, aircraft and emerging weaponry made it seem a though the tank may go the way of the battleship.

But that thinking is no longer dominant and, in fact, the Pentagon is actively developing plans for a tank war against Russia.

As reported by Politico Magazine, the planning is wrapped up in an ongoing project known as The Russia New Generation Warfare study, a secretive effort that would target Moscow in any major war. Some 25 years after the end of the Cold War, the Defense Department is once again growing concerned over Russia’s growing military prowess.

The project is being headed up by Army Lt. Gen. H.R. McMaster, 53, who developed pioneering tactics against Iraqi insurgent forces shortly after the U.S. invaded in 2003. And while those tactics proved successful, the insurgency in Iraq and, to another extent the war in Afghanistan, are little in comparison to lessons the Pentagon is learning from Russia’s military involvement in Ukraine.

What is taking place in Ukraine, however, is seen as a game-changer,” reports Politico Magazine. “McMaster and the study team he has put together believe their work could have huge impact on what the Army buys, how it trains and how its units are structured for years to come—maybe even as much as the Yom Kippur War did.”

Today, as in years past, McMaster is attempting to devise tactics that have been gleaned from wars the U.S. did not fight. That’s difficult, but not impossible and it is not without precedence, as Politico Magazine noted:

A decade before the carnage of the American Civil War, George McClellan, who later became the commander of the Union Army, was an official observer of the European armies engaged in the Crimean War, which Russia lost to an alliance of France, Britain, the Ottoman Empire and Sardinia. That conflict is widely considered the first modern war, in which mass-produced rifles, explosive shells, mines and armored landing craft were first used. John Pershing, who commanded allied forces in World War I had also previously observed the Russo-Japanese War.

It isn’t that the U.S. Army believes that the 1973 Yom Kippur war is a parallel of today’s Ukrainian conflict. Rather, it is the Army’s approach afterward in learning lessons from the conflicts and incorporating them into its own war plans.

Study of the earlier conflict “serves s a useful model for analyzing the conflict in Ukraine,” Col. Kelly Ivanov, a field artillery officer and a top aide to McMaster, said. He added that studying the 1973 war was to “profoundly influence the development of the U.S. Army for the next 15 years.”

And that leads planners to tanks – and other traditional ground warfare.

“We spend a long time talking about winning long-range missile duels,” said McMaster, as reported by Defense One. But what happens once forces get in the front door?

“Look at the enemy countermeasures,” he told the news web site, noting Russia’s use of nominally semi-professional forces who are capable of “dispersion, concealment, intermingling with civilian populations…the ability to disrupt our network strike capability, precision navigation and timing capabilities.”

This all means that “you’re probably going to have a close fight… Increasingly, close combat overmatch is an area we’ve neglected, because we’ve taken it for granted.”

To restore overmatch, McMaster believes that can be achieved with more and better artillery, a mix of old systems and new ones.

“We’re out-ranged by a lot of these systems and they employ improved conventional munitions, which we are going away from. There will be a 40- to 60-percent reduction in lethality in the systems that we have,” he said. “Remember that we already have fewer artillery systems. Now those fewer artillery systems will be less effective relative to the enemy. So we need to do something on that now.”

He adds that Russia’s new T-90 main battle tank is superior to many of NATO’s tanks, and can even match up well against the U.S. M1A1 Abrams series MBTs. Plus, it has excellent reactive armor which means that enemy shells have difficulty piercing its armor. And finally the T-90 incorporates state-of-the-art APS – active protective systems – the Shtora-1 countermeasures suite.

“I’ve interviewed Ukrainian tank gunners,” Phil Karber, president of the Potomac Foundation – who went on a fact-finding mission to Ukraine last year – told Defense One. “They’ll say, ‘I had my [anti-tank weapon] right on it, it got right up to it and then they had this miraculous shield. An invisible shield. Suddenly, my anti-tank missile just went up to the sky.’”

The U.S. has lagged behind in this area, Karber said. Israel developed its own Trophy APS and it became operational in 2009; it was placed aboard Israeli’s Merkava MBT in 2010.