Coup attempt in Turkey raised concerns over safety and security of U.S. nuclear stockpile in country 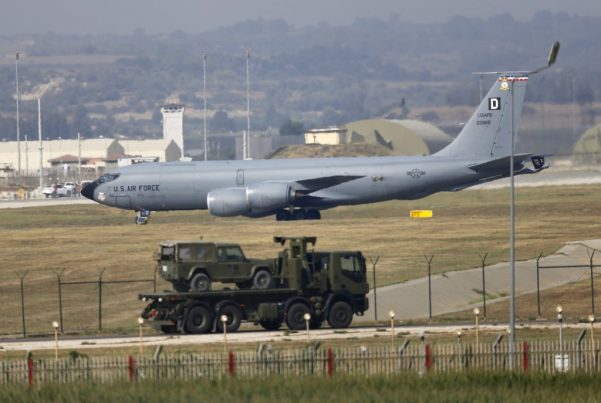 (NationalSecurity.news) Most of the news about the recent coup attempt in Turkey focused on political ramifications and leadership moving forward, but relatively little coverage was given to what could have been a disaster had the coup succeeded: The vulnerability of the stockpile of U.S. nuclear weapons in eastern Europe, the largest on the continent.

As reported by the New Yorker, the weapons are stored at the Incirlik Airbase, in southeastern Turkey, and is NATO’s largest nuclear weapons storage facility. On Saturday morning after the coup began, the U.S. Embassy in Ankara issued an “Emergency Message for U.S. Citizens,” warning that power had been cut to Incirlik that that “local authorities are denying movements on to and off of” the base.

Personnel at the base switched over to backup generators for power. U.S. warplanes stationed there were not permitted from taking off or landing. The security threat level was raised to FPCON DELTA, the highest state of alert, which is usually declared after a terrorist attack or when one is believed imminent.

On Sunday, the base commander, Gen. Bekir Ercan Van, and nine other Turkish officers at Incirlik were detained for allegedly supporting the coup. As of July 18, American flights had resumed at the base, but the power was still cut off.

The director of the Nuclear Information Project at the Federation of American Scientists, Hans M. Kristensen, told the New Yorker that the underground vaults at Incirlik contain around 50 B-61 hydrogen bombs, which is greater than 25 percent of the nuclear weapons in the NATO stockpile. The nuclear yield of each bomb can be adjusted to suit the particular mission for which it would be deployed.

The Hiroshima atomic bomb and an explosive force equal to around 15 kilotons of TNT; by comparison, the yield of a B-61 can be dialed up and adjusted from between 0.3 kilotons and 170 kilotons.

The airbase was built by the U.S. Army Corps of Engineers after World War II. When Turkey joined NATO in 1952, it became a critical airbase during the Cold War. As for the nuclear weapons stored there, the stockpile has been reduced in recent decades, first under President George H. W. Bush and again under his son, George W. Bush. Besides Incirlik, nuclear bombs are also stored at bases in Italy, Germany, Belgium and the Netherlands.

But the security of the weapons is a legitimate concern, especially during a coup attempt but really, anytime, as the New Yorker reported:

In 2010, peace activists climbed over a fence at the Kleine Brogel Airbase, in Belgium, cut through a second fence, entered a hardened shelter containing nuclear-weapon vaults, placed anti-nuclear stickers on the walls, wandered the base for an hour, and posted a video of the intrusion on YouTube. The video showed that the Belgian soldier who finally confronted them was carrying an unloaded rifle.

With the right tools and training, and a couple hours’ time, a person could open one of the storage vaults, remove a weapon and bypass the PAL inside of it. In seconds, an explosive device could be placed atop the weapon, destroying it and releasing a lethal cloud of radiation.

For that and other reasons, including the war in neighboring Syria, security at Incirlik has been upgraded recently. A major upgrade in the perimeter fence around the nuclear weapons storage area has been completed. Due to the base’s proximity to Syria – about 70 miles – and an uptick in terrorist incidents in Turkey, the U.S. military issued an “ordered departure” of all family members of American forces on the base. Currently, about 2,000 troops remain there.